Corsair may have made a name for itself developing memory modules, but in recent years they’ve become one of the industry leaders in gaming peripherals as well. In this Corsair K95 RGB Platinum review, we’re taking a look at the ins and outs of one of the American tech developer’s top-shelf gaming keyboards that promises a brilliant light show and premium build.

Setting aside a few very minor missteps, the Corsair K95 RG Platinum is one of the greatest gaming keyboards the brand has ever produced, thanks to its quality keys, striking good looks, and some of the most beautiful RGB lighting we’ve ever set our eyes on. It may be pricey, but it’s worth every penny.

With a steep price tag that puts it in the same neighbourhood as the excellent Das Keyboard 4 Professional and the gorgeous Razer Huntsman Elite, does the K95 RGB Platinum  truly deserve to be at the top of your shopping list? Stick around and find out.

In a hurry and can’t get through the whole review? Just click any of the links below and you can skip right to that section.

What is the Corsair K95 RGB Platinum?

The Corsair K95 RGB Platinum serves as a follow-up to the brand’s prior flagship mechanical gaming keyboard – the K95 Vengeance – boasting a sturdy frame similar to its predecessor, but with some better switches and more eye-catching RGB capabilities.

It remains quite faithful to its older brother’s design, which is a good thing since it was (and still is) one of the better-looking gaming keyboards around. With the RGB lighting switched on, this peripheral’s as “gamer” as they come. Shut them off, however, and you’ve got yourself a sleek and classy piece of equipment that’ll blend in just fine on a workstation.

The K95 RGB Platinum is the second most expensive gaming keyboard in Corsair’s repertoire, which is saying something since some of their models can get pretty darn pricey. To give you a better idea, it’s a tad pricier than the already steep Das Keyboard 4 Professional and a few bucks shy of our favourite wireless keyboard – the Logitech G915 TKL.

The K95 RGB Platinum offers you a choice of three different Cherry MX Switches: MX Speed, Red, or Brown. All three require a mere 45g of force to actuate. Speed, as its name suggests, is the fastest of the bunch, requiring an actuation distance of only 1.2mm, while the Reds have a longer travel distance to register at 2mm. Both of the aforementioned are linear switches, while the Browns are tactile ones, offering a more satisfying feel to them.

This keyboard comes with a few cool freebies, including the peripheral’s detachable wrist rest, a few extra textured keys, and a keycap remover to help make switching them out a little easier.

You can expect the standard dedicated media controls that you’ll find with most higher-end gaming keyboards, along with a nifty volume wheel.

One of the K95 RGB Platinum’s most attractive features is its handsome design, with its elevated top and bottom portions and its sunken key section. It comes in gunmetal or black all over, both of which are coated in a spiffy brushed aluminium finish, along with 6 tastefully contrasting grey keys on the leftmost side and the Corsair logo and name brandished right on the top.

While the keyboard’s design is plenty fetching on its own, its stunning RGB takes the aesthetic to a whole new level. In fact, it may have some of the best RGB we’ve ever seen on a keyboard, thanks to the individual lit keys and striking underglow. All things considered, the K95 RGB Platinum’s mix of sleek and edgy come together beautifully.

It’s not just a pretty face either, as the aluminium frame adds a welcome level of heft and a remarkable degree of sturdiness fit for a peripheral of its calibre.

Plugging the device into your machine’s USB port right out of the box work’s just fine, though you’ll need to provide a second USB slot if you’re keen on using the keyboard’s USB passthrough feature. It’s not really a must, but having a port that’s more accessible to you is always a good thing.

Most gamers, however, will be itching to personalize their peripheral to suit their individual tastes. Corsair’s iCUE software makes it all increasingly simple on account of its user-friendly UI and its host of tweakable features. You’ll be effortlessly setting your RGB lighting and mapping your macros in no time at all. The keyboard also comes with onboard memory so up to three profiles can be saved on the device itself.

The Cherry MX switches are as impressive as ever, with the Speed variant being the most responsive of the bunch. Unfortunately, this can be a double-edged sword since the shorter actuation distance can be overly sensitive (especially for heavier hands) and may cause some inadvertent keystrokes while you’re still getting used to it.

The Red is similar to the Speed, offering an identical quiet experience but with the standard actuation distance of 2mm which is a bit more forgiving. Finally, the Brown switches cater to gamers who are looking for something that’s a little more audible and has a more tactile feel. It would’ve been nice if Corsair provided switches for users who prefer a more clickety experience, but alas, that isn’t the case.

While the keyboard IS compatible with macOS, a lot of its extra controls don’t function, including the macro buttons and the print screen, pause, and scroll lock keys. It’s also worth noting that it’s fully compatible with Linux PCs but, since the iCUE software isn’t compatible with the OS, you’re going to have to personalize your profiles on a machine with Windows or macOS first.

The K95 RGB Platinum is an exceptional keyboard inside and out, boasting an elegant design with dazzling lights, as well as top-shelf switches that can help you up your game. You’re also getting one of the toughest keyboards around on account of its rugged aluminium frame, so you won’t have to worry about taking out your salty frustrations on your keys every once in a while.

Aside from its steep price tag, the partial Linux and macOS support, and the lack of more audible switches, there’s really no downside to this keyboard. If you can pony up the cash, the Corsair K95 RGB Platinum is one of the best gaming keyboards we’ve managed to get our hands-on. 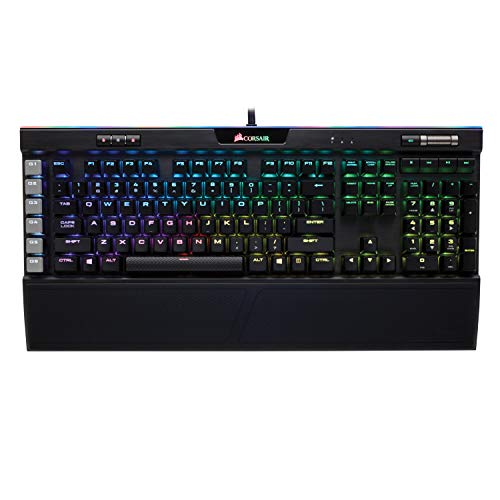