The gamer-centric tech company also wanted to try its hand at a membrane keyboard that could stand toe-to-toe with mechanicals ones. And so they developed the HyperX Alloy Core RGB – a great looking, full RGB gaming keyboard that’s looking to change people’s mind about membrane keys. In this HyperX Alloy Core RGB review,  we’re going to see just how tall it stands as a gaming keyboard and if great membrane-type keyboards really have a shot at rivalling mechanical ones.

If you’re not keen on reading through the entire review, simply click on any of the links below to skip right ahead to that section.

What is the HyperX Alloy Core RGB?

With a name like HyperX, you’re either developing products for gamers or you’re planning to compete with Elon Musk in space programs. Luckily for us, it’s the former. HyperX is a branch of the American tech company Kingston that made its start selling RAMs back in 2002. Since then, it’s become a household name for gaming and has dabbled in all kinds of peripherals including a stellar line of keyboards.

While the majority of its current keyboard roster is mechanical in nature, HyperX also wants to prove that a great membrane keyboard is still a viable option, which is why they developed the HyperX Alloy Core RGB. It still sports the familiar eye-catching HyperX look and love for RGB but is able to sit at a more affordable price point (currently less than $50 bucks on Amazon) by nixing the move to mechanical. While it may not lure away everyone from the overwhelming trend of mechanical switches, it still manages to be a high-quality gaming keyboard for people on a budget. 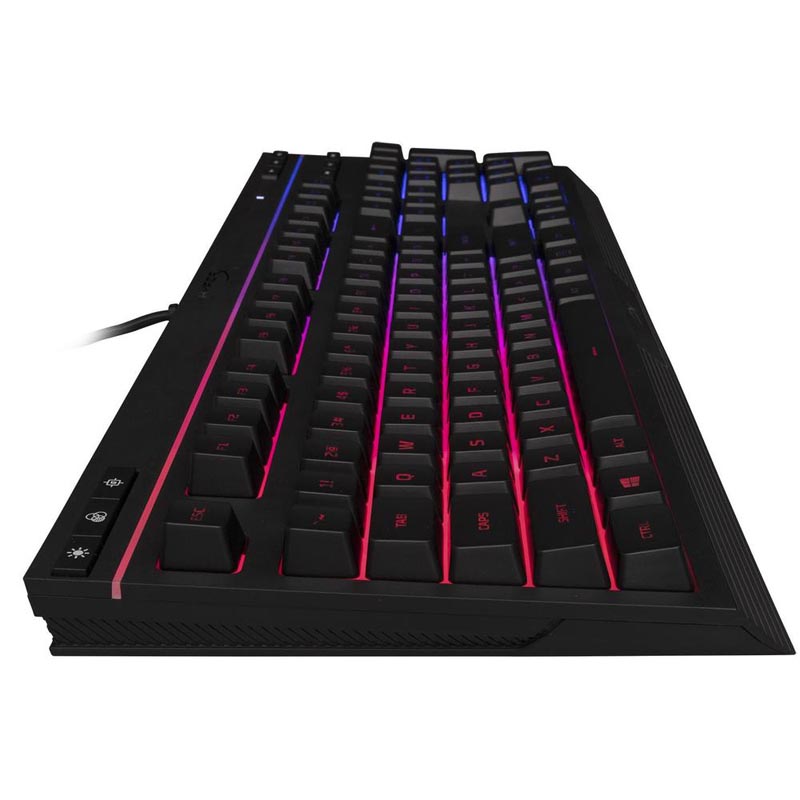 The Alloy Core RGB is a full-size keyboard complete with Numpad and dedicated media keys which you can use to control audio and video playback on the fly. It also offers a nifty Game Mode that disables the Windows key to prevent yourself from accidentally pressing it while in-game. There are a few other functional hotkeys that are worth mentioning, like being able to adjust backlight brightness and shuffle RGB lightning modes at the push of a button.

Which brings me to the Alloy Core RGB’s most attractive feature, its full RGB lighting. Most quality full RGB keyboards cost a pretty penny, but HyperX managed to provide gamers with a great RGB solution without breaking the bank. The Alloy Core supports a lot of the same lighting effects found in its pricier counterparts, including pulsing and colour cycling. It even comes with an awesome-looking light strip that runs across the top of the device, adding even more lights for neon-crazed RGB fanatics.

The membrane keys will likely be the main focus of this keyboard and driving force behind whether or not people will want to consider it. Fortunately, the keyboard itself is very well-built and its membrane keys offer a surprising amount of tactile feedback and responsiveness. While it’s not quite on par with the mechanical alternative, the Alloy Core RGB’s keys are of the highest calibre you can expect from a membrane keyboard and has the added bonus of being soothingly quiet. Oh, and did I mention it’s spill-proof? That way you won’t have to worry too much about splashing some water or other liquids on it during a gaming session. 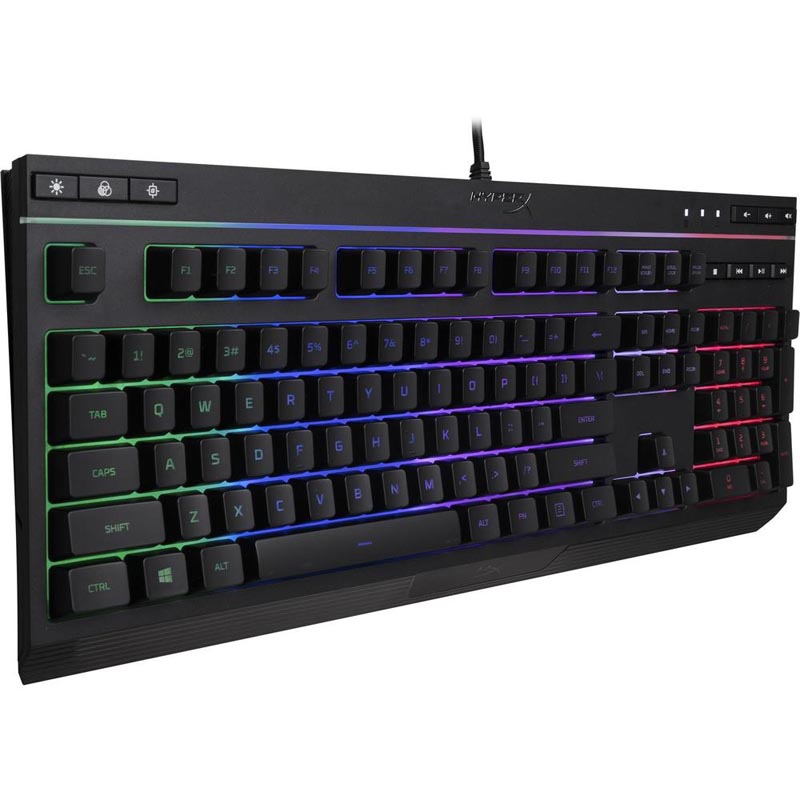 While the Alloy Core screams “gaming” when its RBG lights are in full display like a rave in the 90s, a closer look shows a sleek and stylish keyboard that wouldn’t feel out of place in an office setting especially with the RGB turned down.

Unlike the Mad Catz MCB43107N0B2, for example, that looks like it was ripped straight from the panel of an alien spaceship, the Alloy Core RGB opts for a more lowkey finish that caters to gamers who prefer to steer clear from obnoxiously elaborate designs.

Save from pressing down on its keys, it has no tells of being a budget keyboard and would fool just about anyone into thinking it’s actually mechanical. Not only is it a striking membrane keyboard, but it’s actually one of the better-looking entries in HyperX’s entire gaming keyboard catalogue.

The Alloy Core RGB may not have that satisfying click that comes with mechanical keys, but its high-quality membrane ones are comfortable and soft to the touch. HyperX even managed to get rid of the wobbliness that’s so often associated with membrane keyboards. They’re also deceptively quiet, which is actually a huge plus for people who find the clickity-clack of mechanical keys a little irksome. Its weighty feel ensures that the keyboard won’t slip around during intense gaming sessions, and its top-notch keys guarantee a long shelf life.

There isn’t much to setting up the keyboard beyond simply plugging it in. The media and lighting controls are fairly self-explanatory and figuring out the game mode shouldn’t be too much trouble. One of the Alloy Core RGB’s biggest letdowns, however, is its lack of support for HyperX’s patented NGenuity app, which cripples the keyboard’s customizability. It would’ve been nice to create some macros and presets of our own and fine-tune the keyboard’s impressive RGB capabilities.

HyperX’s membrane keyboard experiment can be deemed a success in my opinion, with the Alloy Core RGB being a surprisingly responsive device that just falls short of standing on par with its mechanical counterparts. Though it does manage to offer a quieter experience which might be enticing enough for users who aren’t

fans of the noisy clicks that come with mechanical switches. it’s a gorgeous looking gaming keyboard by any standards and one that you wouldn’t mind bringing along to your workplace thanks to its low-key design. But if you want to turn it up a notch and put its RGB capabilities in full display, the Alloy Core RGB doesn’t disappoint.

It’s a crying shame, however, that it doesn’t support the HyperX Ngenuity app. If you’re in the market for a budget RGB gaming keyboard from a brand you can trust and don’t mind skipping the transition to mechanical switches, then HyperX Alloy Core RGB might just be exactly what you’re looking for.

The HyperX Alloy Core RGB brings a lot to the table for its budget-friendly price point. For less than 50 bucks, you’re getting a sturdy, well-designed keyboard that features full RGB lighting and is easy on the eyes. Despite utilizing membrane switches, it offers an astonishing amount of tactile feedback and is softer and quieter than its mechanical alternative.

While it’s just shy of being as responsive as mechanical switches and its lack of HyperX Ngenuity is certainly questionable, the Alloy Core RGB remains a fantastic budget gaming keyboard from one of the best brands in the business.

✗ Keys still aren’t as responsive as mechanical ones