If you’re looking for a different spin on poker or a board game that does something different, then New Lexio is for you. It’s got enough interesting rules, fun tiles, and crazy special cards to keep you and your friends or family busy for hours, and it won’t take too long to get started.

Sick of playing the nth game of poker with your buddies? Or maybe you’re just one more game of scrabble away from tearing your hair out. Sounds like it’s about time you tried out a new board game that puts an interesting spin on an established classic. New Lexio seeks to blend traditional poker with some oddball rules, effectively turning the game on its head.

But is messing with a crowd favourite really the right way to go? Or would this board game have been better off being something completely fresh altogether? In this New Lexio review, we’re bringing the gang together to find out if this game really is as fun and simple as it claims to be.

Can’t spare the time to read through the whole review? Simply click any of the links below and we’ll take you right to that section.

If you’re thinking that the “new” in New Lexio is indicative of an older version of the game, then you’d be absolutely right. This board game is actually a revamped version of the original, featuring the same tiles as its predecessor but with a rebuilt ruleset and the introduction of some special action cards.

The game’s core utilizes traditional western poker but switches out playing cards in favour of shiny mahjong-like tiles. You’ll be playing similar hands as in poker, but the tiles are all numbered instead of having picture cards, like the jack, queen, and king, and the strengths of the numbers have been altered.

The tile’s suit also plays a major factor in New Lexio, since not all suits are created equal. Lastly, there’s the addition of special cards that are pretty much there to wreak havoc on the running leaderboard.

You would alsso be interrested in the Stardew Valley board game 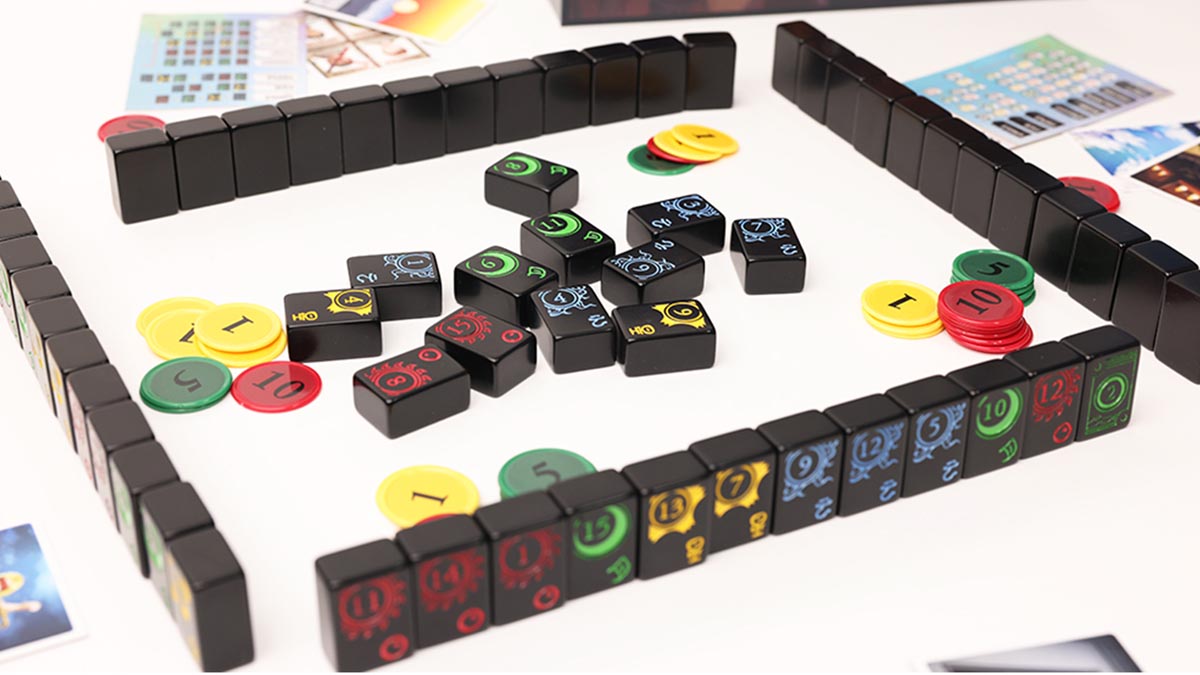 The basics of New Lexio revolve around poker hands, so the game will be extra easy to learn for poker veterans. If you’re a noob to the card game, don’t fret. This board game comes with a cheat sheet to help you figure out the hands that you’re holding. But, of course, there are also suits and special cards to worry about. According to the game’s creators, the game is so easy to learn that young kids should be able to pick it up in only three minutes.

Special cards are essentially curveballs with the potential to completely disrupt how the game is progressing. The “Unwanted Gift” special card, for example, forces you to relinquish one of your tiles to your opponent, while “New Beginnings” will have you reshuffling the tiles held by all the players.

New Lexio does away with the “winner takes all” kind of scoring system and instead implements one that gives all players the opportunity to score, as long as they don’t come in last. That way the game stays competitive all throughout. And you won’t have to stress too much about tallying the scores since they included easy to distinguish coloured chips to make the players lives easier.

The tiles share a common celestial theme, with the suits being comprised of the sun, moon, stars, and clouds. These suits are etched onto the tiles themselves, meaning they’re durable and can’t be erased. The suits aren’t just about looks either, as they have their own power rankings.

Satisfying To The Touch & Music To Your Ears

Holding up playing cards may feel nice and familiar, but there’s something really soothing about the smooth touch of a tile piece and the satisfying clack they make when they hit one another. And they’re weighty to boot which is nice. If you’re not feeling the white tiles, you can always swap them out for some striking black ones which are our favourites. 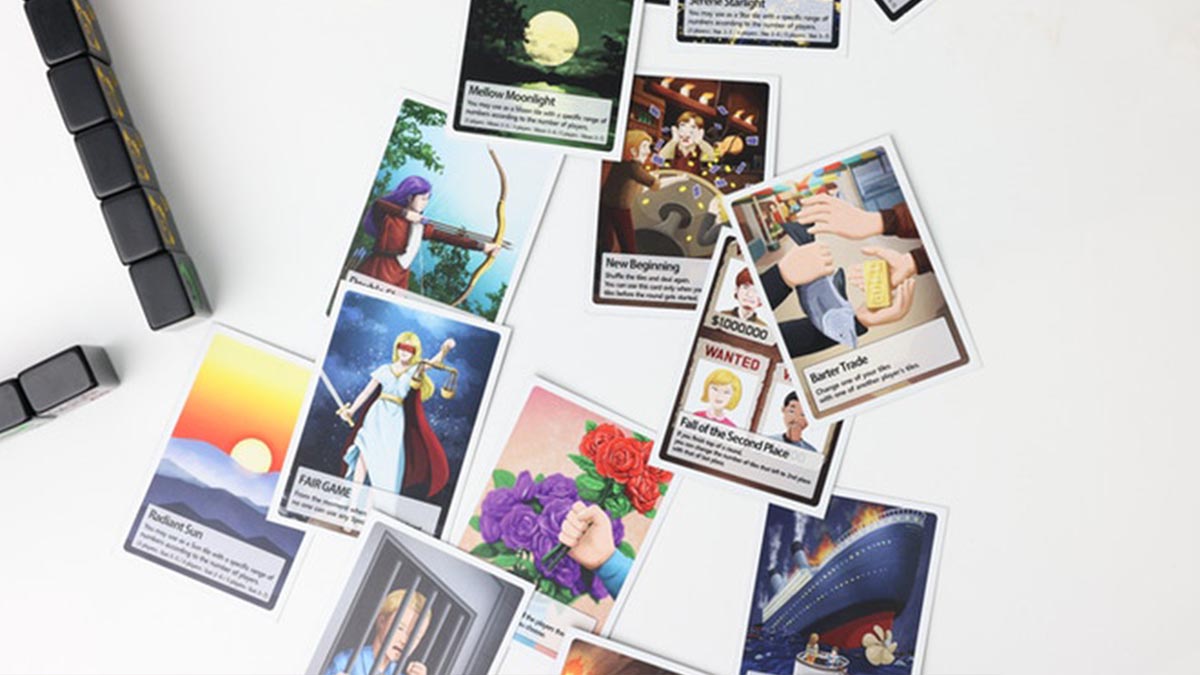 The etchings look decent enough on the New Lexio white tiles, but it’s the black tiles that really make them pop. The contrast between the deep black tiles and their colourful markings give the pieces a sleeker and more eye-catching look. You won’t catch me using white tiles anytime soon.

The special cards are drawn adequately, though there are certain pictures that just appear a fair bit more detailed than others. The colour chips, on the other hand, are thinner than poker chips and the numbers printed on them look bland, giving them a sort of cheap appearance. 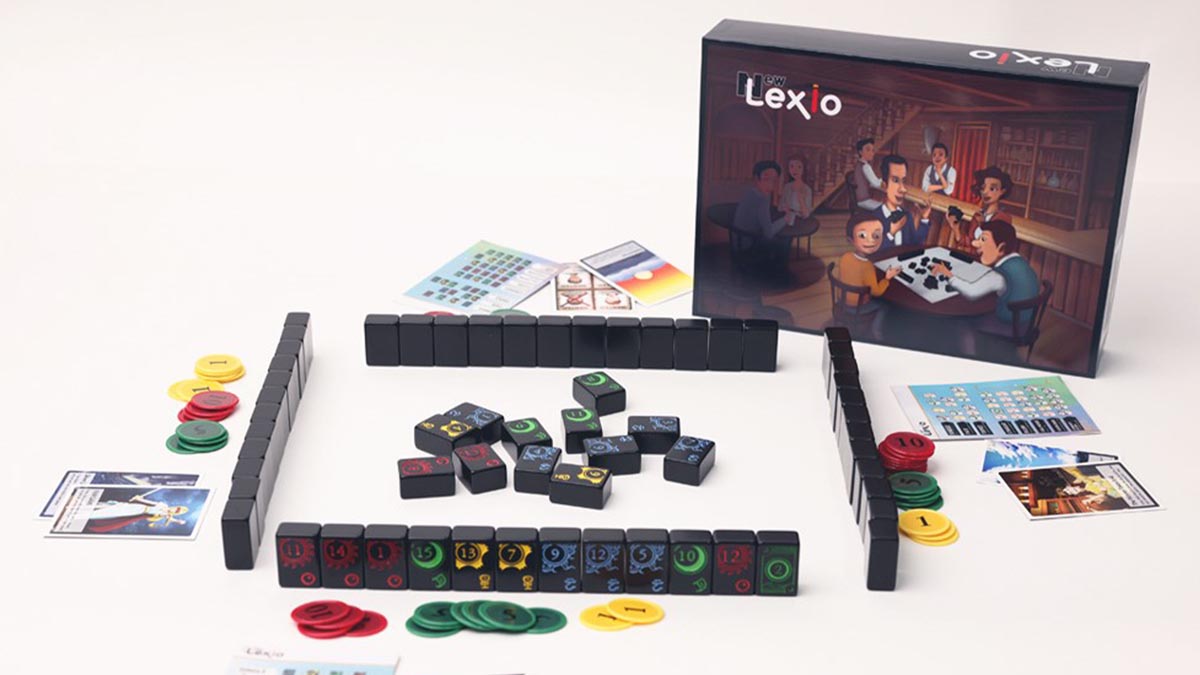 Basically, the point of the game is to put down all the tiles you’ve been dealt which is divided equally between all players. The number of the tile you put down has to be higher than the one before you and if you don’t have a tile to put down, you pass your turn. In New Lexio, 3 is the lowest number working up to 2 which is the highest.

If two players put down similar numbers, the suit determines which is higher – sun> moon> star> cloud. You can either drop 1 tile or 2 – 3 tiles at a time if they’re the same number. It’s possible to drop 5 tiles but you’ll have to follow poker hands to do so.

You start by divvying up the special cards – 3 cards each if its a 5-round game, 2 if there are no limits. Drop all the tiles face down, shuffle, then divide equally between players. Now, all players will raise the tiles in a way that only they can see them. If there’s a player who’s going to use the “New Beginnings” card, they can use it now. If not, the player with a Cloud 3 gets to start.

The next player can only drop an identical number of tiles if the combination of them is higher than the first player. If you don’t have a proper tile or group of tiles to drop, you pass. And if all players pass, the last player to play a tile becomes the leader and can put down any tile they like. Once one player puts down all the tiles from their hand, the round comes to an end, scores are tallied.

Finally, 5th place gives points to the 1st, 2nd, 3rd, and 4th place equal to the difference in the number of remaining tiles, and they don’t get any point at all. Players who lose all their chips are booted. The finally rankings should be determined by the total chips the players have at the end of the game.

New LENot gonna to lie, playing poker on shiny black tiles with celestial suits and crazy special cards is pretty darn fun. The feel and sound of the tiles are strangely soothing and the black ones are really easy on the eyes. Moreover, the special cards truly keep you on your toes the entire game. It’s a reminder that the lead can change in split second.

The rules aren’t nearly as simple as the game’s creators make it sound, with it taking me more than three minutes to fully grasp the game – and I’m not even a young child, mind you. The scoring chips also could’ve been a little fancier. But a few hiccups aside, New Lexio really is an ambitious board game that does justice to its western poker roots while adding interesting new mechanics to it. You and your buddies will definitely have a blast. 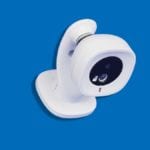 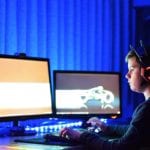 Things You Need To Consider When Buying A Gaming Laptop