PancakeBot uses technology similar to what you’d find in a 3D printer, allowing it to meticulously replicate your tracings to achieve all kinds of detailed drawings. And if you want to add a touch of colour, all you need to do is throw in some food colouring and you can make your artsy pancakes even more fun.
By Mr Gadget June 22, 2021 6 Mins Read
Share on Facebook Share on Twitter Pinterest LinkedIn Tumblr Email

Ever feel jealous over those social media videos of people making pancakes in awesome shapes? Perhaps you also want to make an edible Iron Man mask but just don’t have the art skills to make it not look like an absolute travesty. With PancakeBot, you’ll be whipping up the most intricate pancake designs and you’ll barely need to lift a finger to do it.

This culinary gizmo may just be the coolest kitchen you never knew you needed, allowing you to not only make pancakes in various colours but in different shapes and sizes as well. It doesn’t come cheap, however, so the question remains, just how amazing are these pancakes exactly? In PancakeBot review, we’ve decided to test it out for ourselves, so let’s get cooking.

PancakeBot was a successfully funded Kickstarter campaign run by StoreBound – a family of brands that seeks to bring a Silicon Valley level of pace and innovation to the world of housewares. It’s one of their more out-of-the-box inventions that’s essentially a 3D printer but for pancakes, giving you the opportunity to craft the most intricate pictures. And you can even add colours!

After the PancakeBot is done drawing the picture using a special batter dispensing system, all you have to do is wait for it to cook evenly on the heated griddle and then you’ll be ready to serve your pancake Picasso to your friends and family. Trust me, the kids will love it.

Creating your very own custom pancake couldn’t be simpler thanks to PancakeBot’s remarkably easy to use software which allows you to trace any picture of your choosing, whether it’s a superhero, famous building, or child’s doodle. You dictate where the machine begins drawing and once you’re done tracing, the device takes care of the rest.

You can save the tracings of any of your previous images on an SD card so you can pull them up anytime and recreate them without having to retrace the picture all over again.

The PancakeBot’s specialized batter dispensing system utilizes a compressed air and vacuum combo that lets the device draw even minute details traced from a picture. It even recognizes multiple pictures in the same session, so you can trace a bunch of different emojis, for example, and the machine will draw them all during the same procedure. You’ll also be able to spice up your pancake by throwing in some food colouring with your batter to give it a bit more pizazz.

The included griddle is non-stick and effortlessly easy to clean, so you don’t have to worry about the mess your pancaking drawing sessions leave behind.

Whether you prefer Windows machines or you’re a Mac enthusiast, PancakeBot’s software system works perfectly fine with either platform.

In case you’re concerned about harmful materials being used in the development of the PancakeBot, you’ll be glad to hear that the device is completely BPA (Bisphenol A) free. BPA is a harmful substance that’s known to cause several serious adverse reactions in children.

Library of Video and Downloadable Tutorials

Purchasing the PancakeBot automatically grants you access to a wealth of easy to follow tutorials, including online videos to watch and printable files you can download. 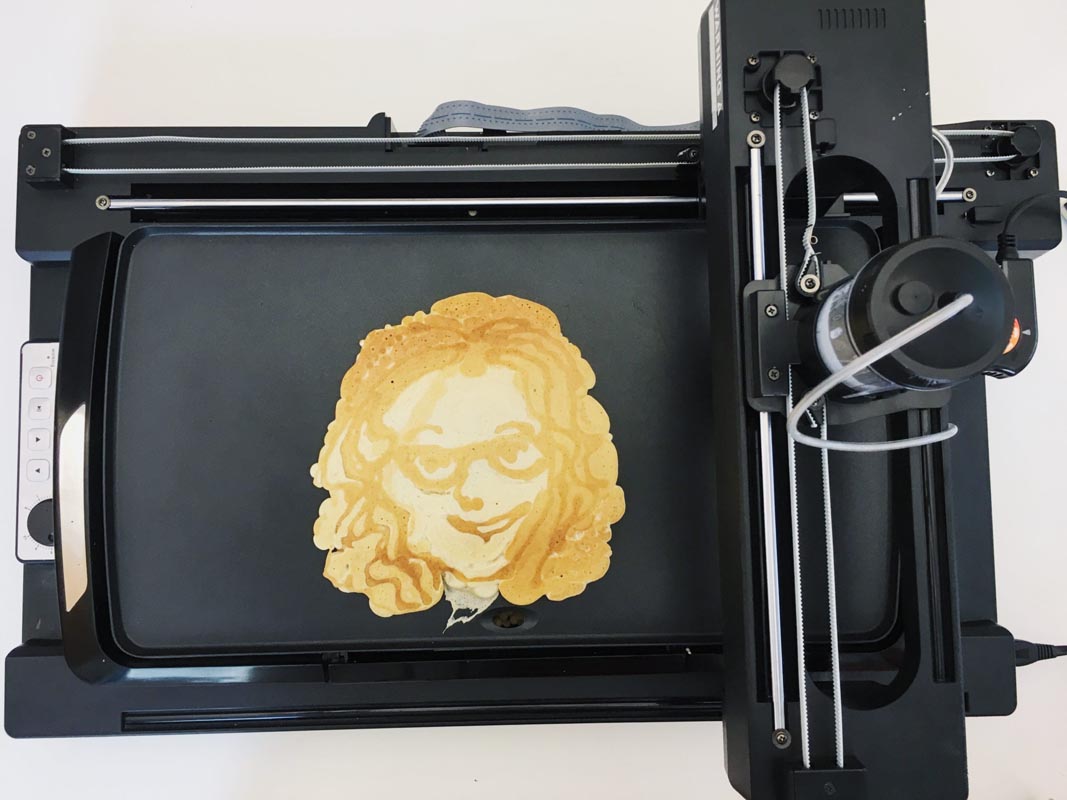 Fundamentally, PancakeBot looks pretty much identical to your standard 3D printer except the tray is replaced by a snazzy-looking griddle. The batter dispensing system is built like a bridge that’s suspended over the griddle, allowing the dispenser to move side to side. The columns of the bridge are connected to rails that give it the ability to move up and down as well.

Working together, the dispenser manages to achieve a full range of motion so it can draw any tracing you throw at it. The whole machine sports a jet-black paint job, including the sturdy non-stick rectangular griddle that’s made out of cast aluminium. It might look a bit out of place next to your collection of pots and pans, but the PancakeBot will probably be the most sophisticated device in your kitchen.

One of the best things about PancakeBot is the fact that it’s just so simple to use. You start off by selecting the picture you have in mind and importing the image into the companion software that’s available on both Windows and Mac machines. After that, you need to trace the outlines of all the shapes in the picture and then go back and fill them all in.

PancakeBot registers your tracings by the order in which you did them, meaning it’ll begin by drawing the outlines and will return to the shapes to do the shading after. From there, you just have to wait for the heated griddle to do its thing, flip the shapes over at the right time to cook the other side and serve with a nice mix of butter and maple syrup. Or maybe some fruit if that’s your thing.

Want to keep your favourite tracings for future use? Not a problem. PancakeBot includes an SD slot where you can save any tracings you may want to use again. That way you won’t have to trace the same picture over and over every time you want to make a pancake of that shape or theme. 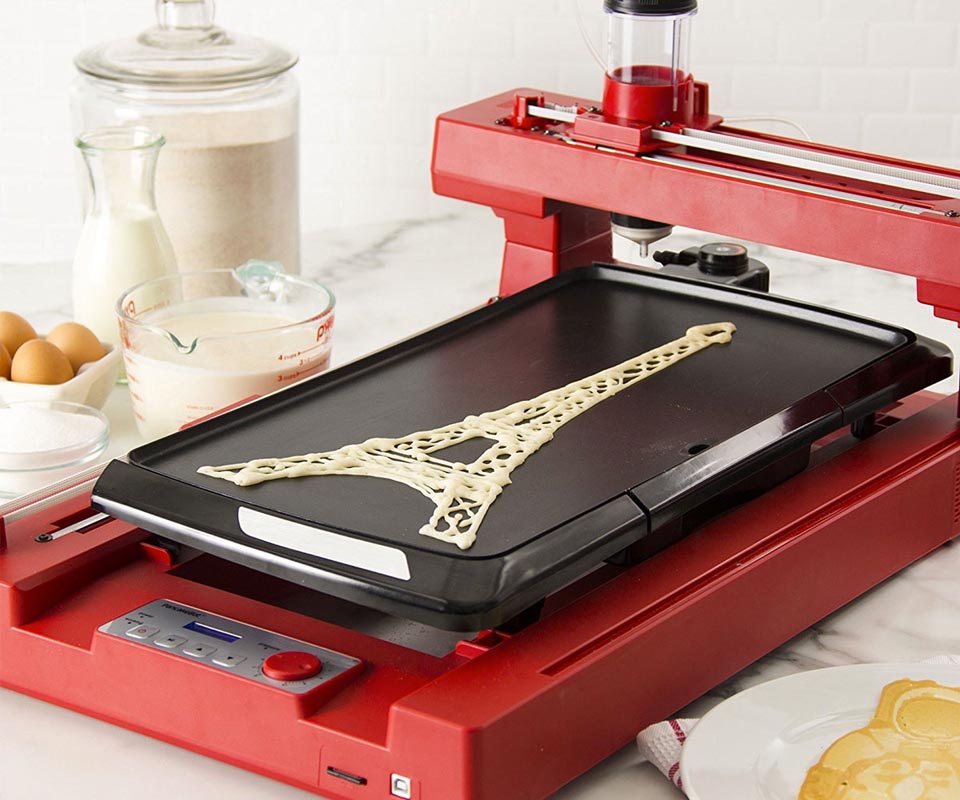 Is the PancakeBot essential? No. But that doesn’t stop it from being an incredibly fun device that your kids are sure to fall in love with. With just a picture and a bit of tracing, you’ll be making amazing customized pancakes just like the ones you see on those social media posts. And you won’t have to go through much of a hassle either since PancakeBot’s software is as user-friendly as they come.

And once you’re all done with the fun, cleaning the griddle is a breeze given that it’s made out of high-quality non-stick material. The only thing that’s likely to make you second-think getting up and buying one of these babies for yourself right now is the painfully steep price tag that comes along with it. After all, at the end of the day, it is pretty much just a pancake printer. But if money’s not an issue and you or your kids have an undeniable love for pancakes, then you won’t regret picking up a PancakeBot. 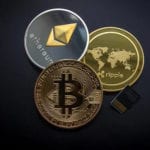 Important Facts About Cryptocurrency You Should Check Out Before Starting 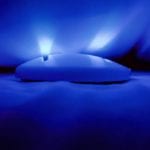 Spyra Two Water Gun: A Big Upgrade on the Original