The Suunto 7 is no doubt a quality piece of kit but is suffering from a personality disorder. It is a good attempt at combining a smartwatch with a fitness tracker and falls just a little short on both fronts. Don’t get me wrong, it has a lot of positives which we’ll cover in this Suunto 7 review, but it has some annoying facets that are hard for technophile and fitness freaks alike to look past.

In many ways, it is comparable to the likes of an Apple Watch or Fossil Gen 5 smartwatch. It does most of the things you would expect from a premium smartwatch.  It boasts the latest Wear OS from Google and looks the part too.

However, with its built-in heart rate monitor, rubber wristband and a focus on sports, it could be compared to fitness trackers like the Gramin Forerunner or a higher-end Fitbit.

Let’s dive in. If you’re short in time, feel free to click ahead to the different sections of this Suunto 7 review:

This guy looks great. There’s no way around it, Suunto has done a brilliant job designing the watch and delivering a premium feel. The materials are top, the build quality is high precision and the colourways are really well put together. Suunto was kind enough to provide me with the Graphite Copper variant it looks understated yet sophisticated. 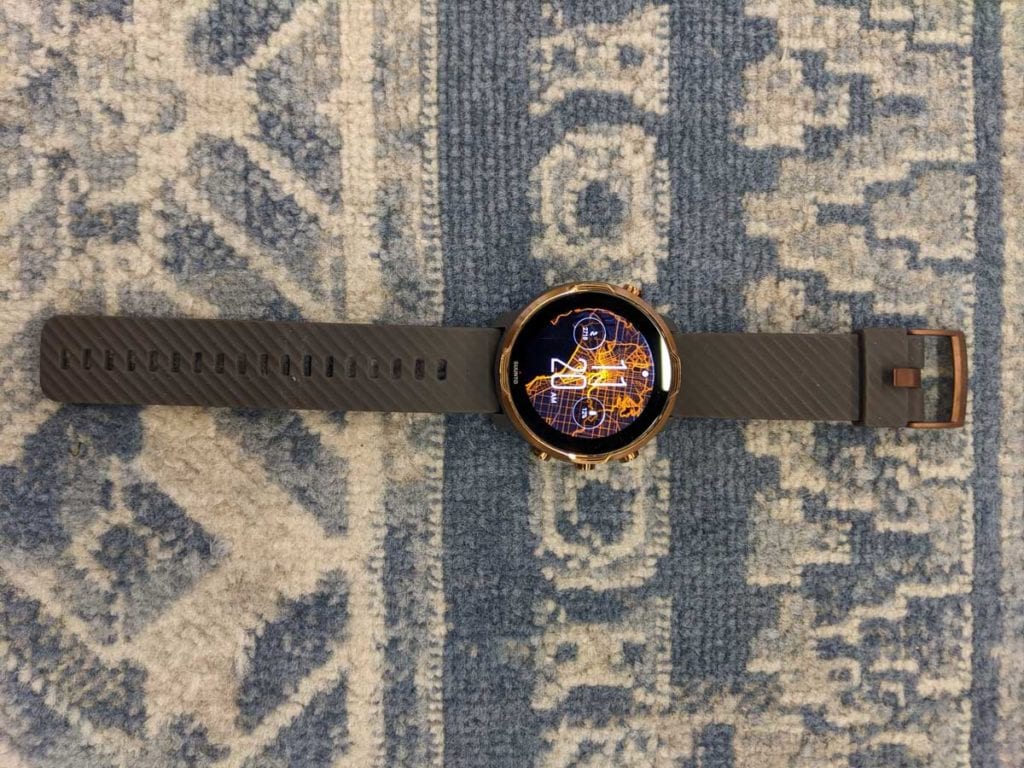 There is a nice weight to it and it feels solid and well put together. The wrist band is made from a ribbed rubber that feels extremely durable and matched the colour of the watch. Overall, Suunto 7 gives an excellent first impression straight out of the box.

Admittedly, I’m not much of a ‘watch person’ so it took a little bit of time to get used to. But once I’d had it on my wrist for a couple of hours the sensation of wearing a watch disappeared. The only time I would really notice it is when I bumped it on something or when the screen lit up to display a notification.

However, while running it was quite noticeable and a bit of distraction for me. It could be because I’m so used to having bare wrists, but the watch felt heavy and took me away from my stride a couple of times.

Saying that the more I wore it, the more comfortable it became. And three weeks into the review, I am now typing this consciously trying to feel the watch the determine comfort levels which can only be a good thing I suppose.

The most impressive thing about the Suunto 7 is its huge AMOLED display. Coming in at a whopping 1.38-inch (trust me this is huge for a smartwatch) with a resolution of 484 x 484, there is a lot to look at – and looking at it is nice. the AMOLED display ensures a bright and detailed image that far surpassed my expectations of what a smartwatch display can look like.

The touch-screen is very responsive and feels just like a smartphone does, albeit with a small display. Gorilla Glass protects the display from scratches, cracks & bumps. Overall, the display is excellent and adds a lot of value to the wearer.

Suunto opted for Qualcomm’s Snapdragon 3100 as the processing unit, and it’s a good choice. Firstly, it’s designed for wearable and in particular smartwatches running Wear OS. I won’t list all of the benefits, since they can be found from the link above. However, it’s worth mentioning here that it does an excellent job delivering high performance and maximising battery performance (more on that below).

One of the drawbacks of the beautiful display is the battery drain. When you add in GPS tracking, optical heart rate monitoring, Bluetooth & Wi-Fi, there’s no surprise you’d be lucky to get 30 hours out of it with typical usage. For me, this isn’t too much of an issue since I would take it off each night even if it was a normal watch. So charging it once per day at night is fine.

For those who of you who want a smartwatch for notifications, the occasional song change on Spotify and for checking the time, I estimate that you could get around 5 days of battery with this type of usage. Which is quite a typical usage for people with non-active lifestyles.

If you’re just using the Suunto 7 as a watch to tell the time and look good, then the battery will last around a month. Which is great if you’re off on some sort of excursion away from the civilisation, but defeats the point of owning this type of watch. The option is there if you need it though.

Overall the battery life isn’t amazing but it’s good enough to not drastically impact the usability of the Suunto 7.

A Wear OS watch is designed to integrate with the Google app ecosystem and provide a customisable and comprehensive suite of tools right on your wrist. This is fundamentally a sound idea but requires good execution. Unfortunately, in this case, it is close, but not quite good enough.

For example, the Suunto 7 has its own fitness tracking application, which is quite good and provides quite an in-depth tracking and analysis of your runs, bikes, swims etc. It will compare your current run to previous runs to give you comparisons, as well as some other cool measurements. However, if you want your Suunto 7 to keep track of your heart rate, daily steps etc…you’ll need to use Google Fit. Not ideal and it means you’re giving away your data to separate companies rather than one. 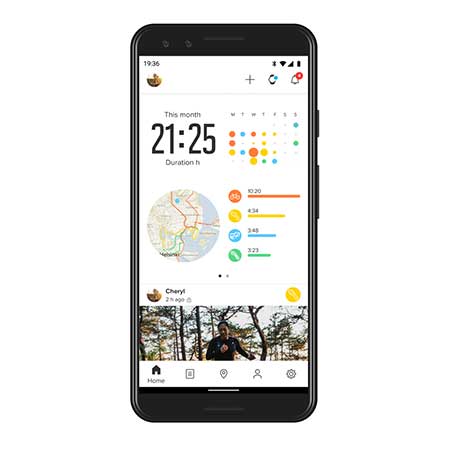 Suunto really missed a trick here and it’s unfortunate that a watch with Wear OS, still has holes in the usability to due poorly designed software integration. It’s not an absolute deal-breaker, but certainly, something to consider.

However, despite requiring an assortment of fitness apps, the overall software performance on the Suunto is excellent. All of the apps I used functioned with ease and seemed well optimised to the watch. The large display and responsive touch inputs made navigating the apps almost as easy as using a smartphone.

A really cool feature that Suunto bolted on to Wear OS is the offline maps. Maps can be downloaded directly on to the watch and used for navigating around your desired location. This offline map can be displayed as the watch face and produces a heatmap based on where you have travelled to. It’s an actually really cool, futurist feature,

Overall the OS is great and will only improve with time. I don’t think it is quite there yet but it isn’t far off. 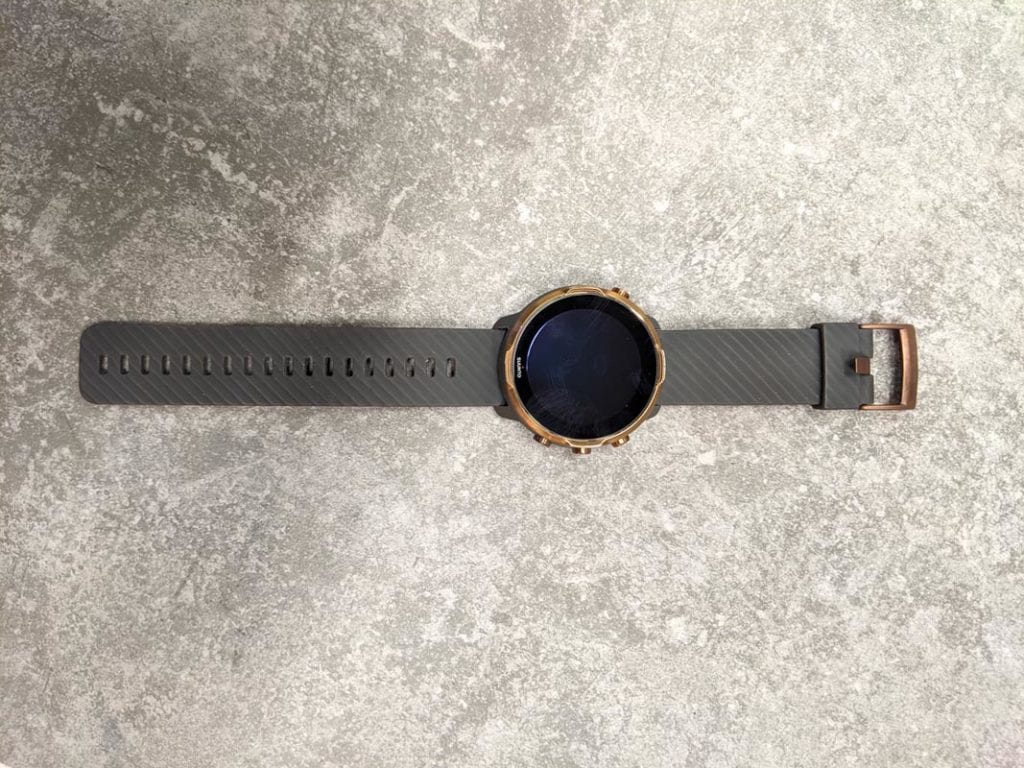 There’s no doubt that this is quality fitness smartwatch, but that’s the problem, it tries to be all things to all people, which rarely ends well. I must admit they were very close to pulling it off. I think this is the perfect watch for someone who needs a device that looks great, can do all the usual smartwatch stuff and keep track of your exercise. But, I wouldn’t recommend this watch to somebody looking for a really good fitness tracker, or somebody looking for a really good smartwatch. It’s for those who want the best of both worlds but are happy to compromise a little on both ends of the feature list.

This watch was priced at A$799, but has very recently dropped to A$599, which makes it much better value for money. I’d say this is a fair price for the Suunto 7.Suunto 7 Review

Suunto’s first try at making a Wear OS smart/fitness watch is a good first attempt. It has a lot of pros, mainly relating to the build, design and display but it’s self down a bit with bad battery life and off software choices. At the old price of A$799 it would have been hard to recommend, but at A$599, it’s worth looking at.

✗ Battery length on the shorter side

How To Choose A Fitness Tracker – 8 Key Factors & Considerations