First, it was the headphone jacks. Now, Apple has away the charging port too. This means without a trusty wireless charging pad, you could be out of battery for good! So does this mean we’re closer to the wireless-only future?

Well, if it will happen, it may take a long time before we finally get rid of our wires and connectors completely. But even now, many companies are trying to take the lead with their wireless chargers. One of them is Concepter, the company that brought Wyrex. It was first marketed in Kickstarter as the “wireless charger for ALL your devices,” which is a pretty big promise for a new product. So how does it hold up? Is it worth trying out? Find out with this Wyrex Charging Pad review.

The Wyrex wireless charging pad was launched on Kickstarter back in 2018. From its goal of $30,000, the product received a favourable response from backers worldwide, receiving about $92,169 by the end of the campaign. Its success wasn’t a surprise since it promised to charge both Apple and Android devices and two smartphones at the same time. Its other selling points included being a charger for AirPods and Apple Watch.  This is a device that’s designed to charge all your devices at once. You can keep them in the same position without worrying about individual sockets.

The Wyrex can also save you from tangled wires and handling multiple chargers. And by having fewer parts and accessories, you can have a more organized working area at the office or home. This also makes using your phone easier and more convenient since there’s no wire for you to position properly.  Now, the Wyrex initially had a retail price of $119. But today, it’s at a higher price point at $134, which is more expensive than other charging pads that can accommodate more than one device. For instance, the Belkin Boost Charge 3-in-1 Wireless Charger ($129.99) and the Logitech Powered Charging Dock from Dell ($129.99). 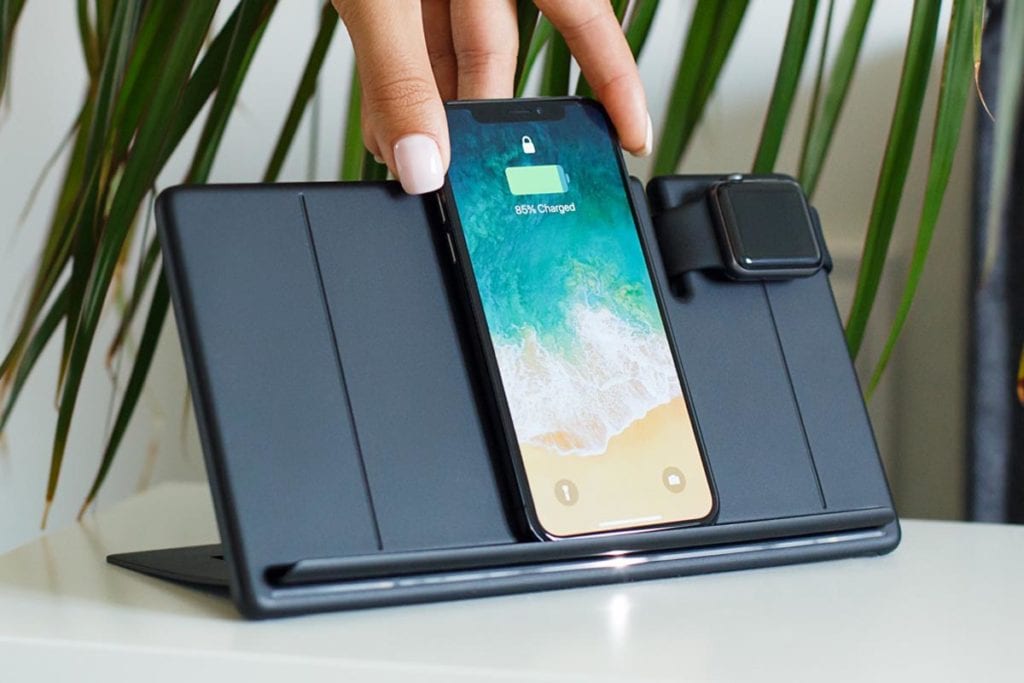 In this Wyrex charging pad review, let’s focus on its best features, which includes the following:

The Wyrex can be a very convenient accessory. It can accommodate 2 smartphones, your AirPods, and Apple Watch. Thus, you can avoid several inputs and plugs, tangled cables, and creating a mess. You can just set it up on a table and place your devices on top. No plugging in and no worries. The best part is, it is incredibly flexible as it can accommodate most phones and accessories, except for smartwatches as the Wyrex is exclusive to Apple Watch.

The Wyrex features 10W Qi coils, which can accommodate phones of different sizes and operating systems. Compared to standard wireless chargers, it can charge your device faster by one-third. This is an amazing feature since you can charge your phone faster and save time waiting. Also, since Samsung phones are designed to charge at a max speed of 9W, recent iPhones at 7.5W, and the latest Android phones at 10W, the Wyrex is well capable of charging your phone quicker and more efficiently no matter the unit. And with the latest iPhone 11, which has a max of 18W, it can still work better than most wireless chargers with 5W coils,

You can use this charging pad with a wide variety of Qi-enabled smartphones, including the following:

Aside from phones, you can use the Wyrex for any accessories that are Qi standard supported. This feature puts Wyrex at a big advantage compared to the Dell charging dock and Belkin Boost Charge, which are designed for Apple products.  However, take note that the charging area for the watch is dedicated only to Apple Watches. The company also does not guarantee this feature. And as indicated on the website, it is only provided as a bonus. This is a big let down, especially for a product that promises to charge ALL your devices.

From its official website, here are the product specifications of the Wyrex charging pad 2.0:

The 10W coil is fairly common to fast wireless chargers. Having 2 10W charging stations for smartphones isn’t unique to the product as well. The Unravel 3-in-1 Charger, which is also compatible with Android phones, is equipped with it too.  What makes it different, however, is that it has 6 charging coils: a 5W for the watch charger, 5W for small accessories, and 4 10W for the smartphones. The 4 10W Qi coils are then stacked together, creating dual stations for phones. This creates a larger charging area, allowing you to put your phone in any orientation. 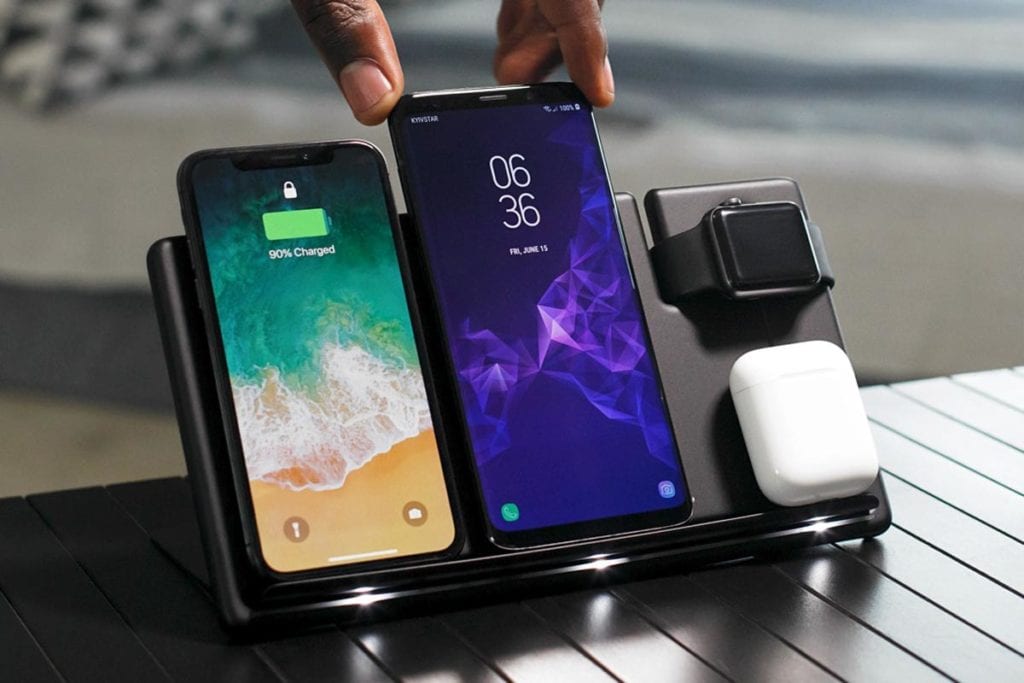 At first glance, the Wyrex looks like a big plastic panel. It’s a simple, plain, and no-frills accessory that’s a bit bigger than other charging pads like the Belkin Boost Charge and the Dell Charging Dock. This is a welcomed feature since it’s more capable of charging more devices.

The Wyrex can also be used in both ways. You can switch from the pad lying down or kickstand mode. For devices like the iPhone X that unlocks through Face ID, this is a great feature since you can easily access your phone even while charging. This mode is also better if you want to read, watch, or video chat conveniently.

However, in this mode, we found that getting the right position for your Apple Watch to start charging can be difficult. This is because the magnet that’s supposed to hold the device, is not strong enough to keep it in place.

Thus, you may have to move it around to secure it in its position or remove the straps – which is very inconvenient. Or you may just have to put the pad in the lying down position.  Another issue that came with the first Wyrex models is the LED indicator located in the status bar. When charging, these lights stay on, and they can be very bright at night. But with the updated units, you now have the option to switch to night mode and turn off the LED lights.

All wireless chargers are designed to plug and play. The same goes for the Wyrex. When everything is working properly, you should notice the LED blinking either on the cable plug or on the power adapter. Then you can put your device on any of the charging areas. It’s that easy.

Ideally, it should work flawlessly. However, based on comments from backers of the product on Kickstarter, many were not pleased with the performance of their Wyrex wireless charger. While the product campaign ended in 2018, there are still users who are sharing their disappointment in October 2020. And issues aren’t just about logistics but the overall usability of the product.

The Wyrex wireless charger is built with great ideas. The promise of having one pad to charge all your devices is certainly appealing. However, it seems to need more work, especially on its quality and reliability. And with existing problems with its Kickstarter campaign today, even after more than 2 years, we can’t recommend it wholeheartedly.

When it comes to flexibility, the Wyrex charging pad is ahead of its competitors. Offering the ability to charge not just 1 or 2 but 4 devices at the same time is a great advantage for any home or work setting… if it works properly.

✓ Can work on both Android and Apple

✗ Not so good build quality