With recent studies showing that the air indoors can be more seriously polluted than the air outside, it’s no wonder why air purifiers continue to grow in popularity – and sales. They have become vital in homes, schools, restaurants, and offices. Today, they are even said to help reduce the spread of COVID-19 as they can also help improve ventilation indoors.

If you are looking for a portable, effective, and sleek air purifier to use in your car, then the HENiR is a good choice. Not only does it eliminate allergens, microbes, pollutants, and other harmful particles in the air but it can make your car smell better and fresher as well. With HENiR, you can say goodbye to your car’s humid and other unpleasant odors and say hello to a cleaner, purer, and better-smelling air around you while driving.

Now, since air purifiers have become so in demand, a lot of newer and “smarter” models have been coming out. We have even reviewed a few of them, including the breeva air purifier and the sustainable air purifier Briiv. We’ve made a list of the best air purifiers in Australia as well. But today, let’s focus on the newest one to join the air purifier market – the HENiR.

The HENiR is a portable purifier designed to go with your car, office, and other spaces where you can’t install a massive air purifier. It is self-proclaimed as “The World’s Smartest Portable Air Purifier” and able to terminate viruses and other impurities in the air. But how exactly does it compare with other portable purifiers? More importantly, is it worth trying out? Let’s find out with this HENiR review.

Can’t read the whole thing? Just click on any of the links below to skip to that section.

Many of the air purifiers today offer the latest and most efficient way of improving your indoor air quality. But usually, the most powerful are also among the biggest and heaviest units available. So once you install them, you can forget about trying to move or carry them.

If that’s the case, then what about your car, which is another enclosed space you always have to go to? What about at work where you have to share the space with other people and can’t install large appliances? Well, that’s what the HENiR is designed for.

HENiR is portable, so you can have cleaner and fresher air wherever you go. You can use it inside your car, on top of your desk, kitchen, bedroom, or anywhere you want as long as you have a power source or a power bank. Unfortunately, to enjoy the HENiR, you’d have to pay a little more than you would in other portable air purifiers. With a retail price of US$219, it’s more expensive than the CALODY Portable Air Purifier, Sharper Image Air Purifier, and Wynd Plus.

You can, however, try the HENiR at a much lower price if you catch its campaign on Indiegogo. Instead of US$219, it will be offered at US$99 for Super Early Bird customers. So better hurry if you want to get your hands on the newest portable air purifier in the market.

Aside from its portability, here are the other features we love about the HENiR:

HENiR uses a 4-step air purification and sterilization process to ensure you’ll always have clean and fresh air with you. To understand better, below is a quick rundown of how this portable air purifier works.

The HENiR has a pre-filter layered on top of its HEPA filter. This collects larger particles such as hair follicles and prevents them from contaminating the HEPA filter. It also keeps the filter from being dirty.

HENiR’s copper fiber filter is a layer that helps in sterilizing bacteria, which is attached to the filter. Thus, preventing dust and germs from replicating. According to the company, copper fiber can sterilize 99% of bacteria and can remove 99.9% of the 5 major bacteria, which includes salmonella, staphylococcus aureus, pneumonia, pseudomonas aeruginosa, and e.coli. Now, we’re no expert but one quick Google search and you’ll find that these bacteria can cause diseases in plants, animals, and humans.

HEPA filters are considered the most effective in eliminating particulates. Now, there are different levels of HEPA filter efficiency. There are H10-H12, which are called True HEPA and can trap 85-99.5% of all particles with a size of 0.1 microns in diameter. Then there are H13-H14, which are the highest tier and considered medical-grade. So they can trap more particles.

For HENiR, its HEPA filter is capable of filtering 99.97% of fine dust over 0.3μm. This is at par with the filtration rate of other portable purifiers such as Sharper Image, CALODY, and Wynd Plus.

To add that extra layer of protection, HENiR is equipped with a UV-C LED. This helps prevent bacteria and other microbial organisms. It can also sterilize viruses that are smaller than 0.3μm. 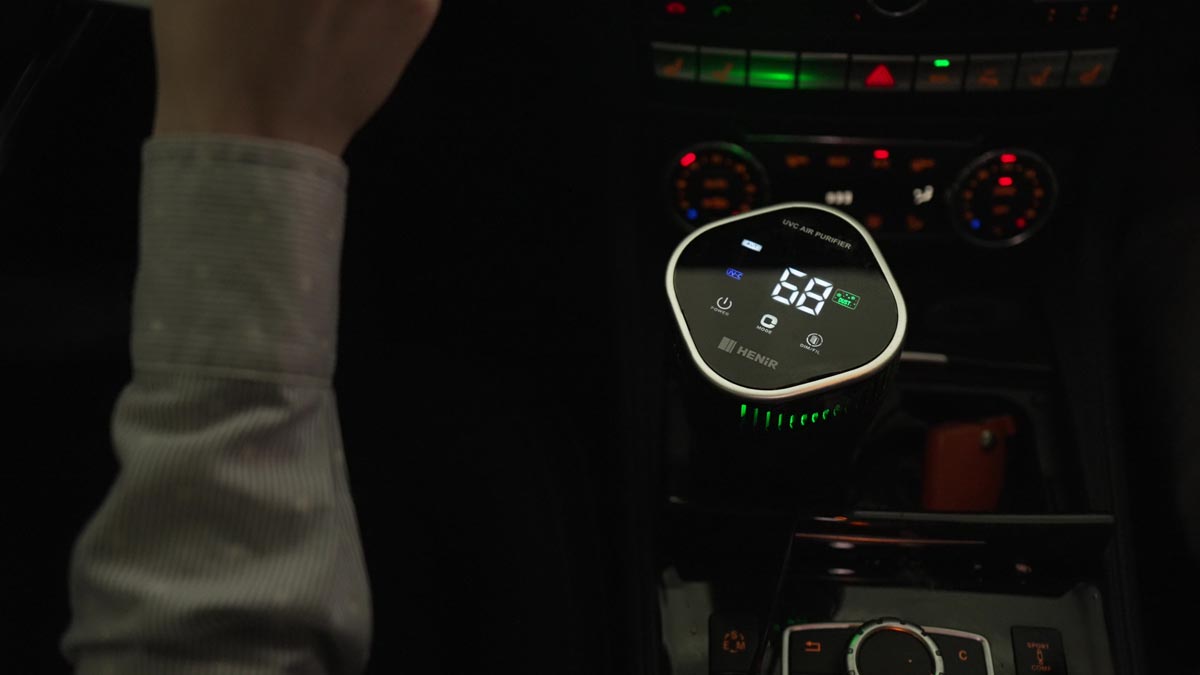 Another feature worth noting is HENiR’s fragrance cartridge. With it, you can freshen up the air inside your car and get rid of any unpleasant odor.

Now, HENiR has made some pretty bold claims, including being the smartest and most powerful portable air purifier. While it’s true that it can eliminate dust, bacteria, ultra-fine particles, and even viruses, it’s certainly not the most powerful – even with its unique copper fiber layer. It’s also not the smartest with the obvious lack of connectivity features. But is it the first to incorporate fragrance with filtration and sterilization? At least for us, yes, it is. 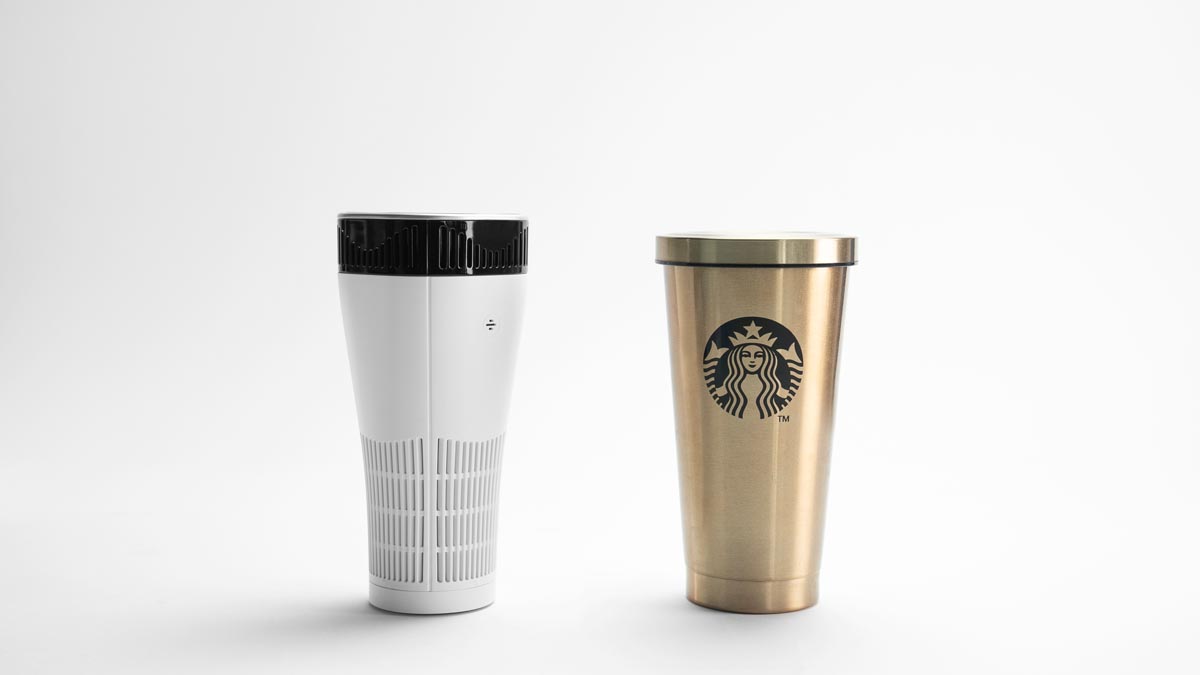 You might be wondering why we’re comparing Wynd and HENiR so much. Well, it’s because they both started on crowdfunding platforms – Wynd was launched on Kickstarter in 2016. Also, they look very similar. Both look like travel tumblers with a torch-shaped spiral structure and can fit perfectly in your car’s cup holder.

However, with the added LED light reflecting expansion pads, HENiR looks more modern. Plus, these lights are pretty cool since they change according to the air quality around you. This allows you to quickly see if you’re breathing good (green), moderate (yellow), or unhealthy (red) air. You can even use it as a nightstand while sleeping. The HENiR air purifier also has a sleek LED touch panel that’s easy to operate and understand. You can use it to change modes, adjust the brightness, and monitor the air quality in an area.

Putting together filtration, sterilization, and fragrance in one device was really a clever idea. This makes the HENiR perfect for your car since it not only makes the air cleaner but it also makes it smell better. Overall, while it may not be the most powerful, efficient, or smartest portable air purifier around, the HENiR is certainly a good option to use in your car. For other purposes, however, you might want to consider something else. 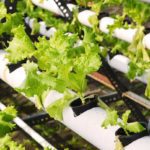 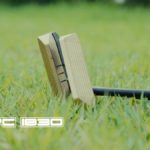