Razer has been designing and producing hardware specifically for gamers, streamers, and content creators around the world. Their line up of streaming equipment has everything from microphones and capture cards to headsets and cameras – all following a cool and great looking aesthetics that the company is widely known for. And their Razer Seiren X fits perfectly in that mix.

The Razer Seiren X is a good entry-level microphone that will work well with streamers who want to upgrade their gear from their headset mic to a standalone device. This will also look great in your streams and videos, and will perfectly fit with your other gaming equipment.

Easy to set up

Picks up noise from mouse and keyboard

But compared to other professional microphones, how does it compare? Does it perform as good as it looks? Does it offer good value for your money? Is it worth the buy? Let’s find that out with this Razer Seiren X review.

Don’t have time to read the full review? Click on the links below to skip to that section.

For creators who are planning to take YouTube and Twitch streaming seriously, it’s time to leave headset mics behind and move on to a more quality broadcasting device – which Razer’s Seiren X aims to be. Aside from targeting gamers and streamers who want to go pro, it is also marketed for individuals who are always on the go.

See, many of the best streaming microphones today are quite bulky and heavy, which can be a problem if you travel often or if you have limited space on your desktop. Also, many of these mics tend to take up a lot of space in your camera feed. But with the Seiren X, this isn’t much of a problem. It is incredibly small and handy compared to the Blue Yeti and HyperX QuadCast, which are two of the go-to microphones for most streamers.

However, compared to the two, the Razer Seiren X USB streaming microphone has a lower sound quality. In terms of price, it is cheaper than most high-end microphones but it’s also more expensive than most entry-level mics. And here’s our dilemma with this product – at $99.99 at Razer’s website, it’s quite pricey as an entry-level microphone. But for its great look and portability, it’s not bad value for money. If you like Razer’s aesthetic, then this is for you.

For this Razer Seiren X condenser microphone review, let’s first focus on the microphone quality. The idea behind the super-cardioid polar pattern is that it should only pick up the sound that you want it to. It should also be able to ignore sounds in the background like the fan, keyboard, mouse clicks, and other ambient room noise. However, for a super-cardioid mic, the Seiren X picks up a lot of noise. Some users even noted that it can capture the voices of people in another room.

Now, if you do have the chance to record in a very quiet environment, this mic can surprise you. It’s more sensitive in the higher frequencies and can pick up those little details in your voice. Indeed, this microphone can capture your voice with great clarity but you need an isolated and really quiet environment to experience that kind of quality. So why is this the case?

Let’s discuss the basic specifications for a good streaming microphone – which is a frequency response of 20 Hz to 20,000 Hz and a cardioid polar pattern. You also have to consider adaptability or the ability of the microphone to perform well in any scenario.

While the Razer Seiren X does meet the basic frequency response, it has a different polar pattern. Now, the difference is that a cardioid microphone (detailed explanation in the link above) has a wider pickup angle so it can record more sounds around it. On the other hand, a super-cardioid can pick up and record sound at a tighter angle, resulting in lesser unwanted background noise. Thus, your voice will be louder and clearer to your audience – given that you position it correctly.

More info on the differences can be found here.

The disadvantage of being a super-cardioid is that you have to precisely position the mic closer in front of you – which can then affect its adaptability. But a good fix to this is to set up a microphone arm for Razer Seiren X. This will put the mic closer to you and help you get better audio quality. This will also minimize the shock from your desk and the noise from your keyboard and mouse.

Overall, the Seiren X falls slightly short in sound quality if you compare it to the leading microphones today which are the Blue Yeti USB and Quadcast. These two can produce warm and full tones that deliver well to any audience. However, they are pricier too with the Quadcast starting from AU$400 and the Blue Yeti USB for AU$220.

Now, it’ll be unfair to base our verdict on the comparison between the Seiren X to high-end professional microphones. So let’s compare it to other entry-level mics that are also quite popular: the Blue Snowball iCE (AU$88) and the Samson Q2U (AU$107). These two are cheaper but they offer similar decent audio quality with the Seiren X, which is sold at Amazon Australia for AU$125. personally, I think the Razer looks the best though.

That said, Razer’s Seiren X has average audio quality. So it’s not the best microphone around but it certainly isn’t the worst.

There’s also the handsome Razer Seiren X setup for PS4. The only difference of the PS4 edition from the original is the inclusion of the PS4 logo, blue and black colour scheme, and the mute button lighting up in blue rather than in green.

This microphone almost looks like a speaker at first glance, especially with the headphone volume control in front. There’s also a mute button that glows in green when not activated and turns to red when muted. At the bottom, there’s a port to connect the microphone with your computer and a headphone jack that offers zero-latency monitoring. This will allow you to hear exactly what your audience hears without the echo that usually appears in mid-stream.

In terms of design, the look is flawless. However, we do have a tiny problem with the port and jack at the bottom. Since there’s just a short distance between the mic and the stand, plugging in the wires is a bother.

If you’re looking for a plug-and-play microphone, the Razer Seiren X is a very good option. It’s extremely easy to assemble. You just have to connect the microphone with the shock mount, plug the USB cable, and connect it with your computer. Now, since this is a plug-and-play device, a Razer Seiren X software is not required. You may simply make the necessary changes through your computer’s sound control settings.

While the microphone will work immediately after plugging it in, it’ll be better for you to adjust its settings to achieve a better sound quality. As a guide, try to adjust your recording quality to DVD quality, 48,000 Hz, 2 channels, and 16-bit for better sound quality. If that doesn’t do the trick, you may have to do some tweaks here and there to find that “sweet spot.”

The shock mount is actually top-notch. It has a surprising amount of weight to it which not only provides a premium feel but also helps prevent it from being knocked over. Things on desks get knocked over all of the time, so if you’re little clumsy it might be worth grabbing the shock mount. Unfortunately, these are sold separately, but it’s hard to complain when this is a budget mic.

To conclude our Razer Seiren X review, we must say that this is a decent microphone for gaming, streaming, and content creation. Due to its size and portability, it’s best for individuals who are always on the go. 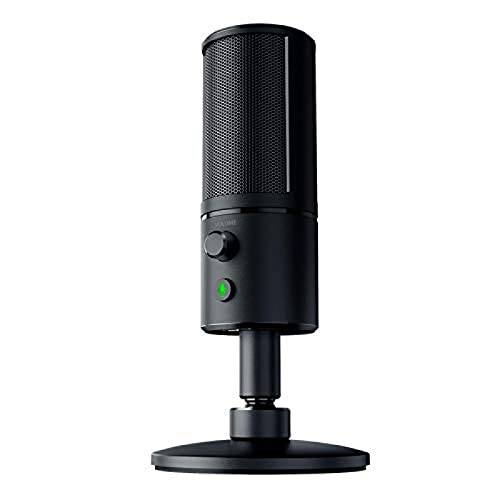 For its sound quality, the Razer Seiren X is certainly not the best. More microphones can produce the same sound quality at a lower price. However, if you consider its look, portability, and built, it is better from the others. But is that enough reason to buy it? Well, that’s for you to decide.

If you’re in the market for a webcam, make sure you check out our Razer Kiyo review!

TUMI Teams Up with Razer for Fashionable Gaming Travel Gear

Sennheiser MKE 200: Take Mobile Vlogging to the Next Level