When crowdfunding succeeds, everyone’s a winner. From Kickstarter’s most recent Raine One Electric Scooter to Indiegogo’s Tiny Tower Laptop Stand, the concept of crowdfunding is a revelation. However, success is often surrounded with failure and when the walls come down on certain crowdfunded prototypes; it gets real nasty.

Touted as the world’s most intelligent USB charger, this Indiegogo startup smashed it’s $35,000 target with over $900,000 funded by excited backers. However, fast forward a few years and it transpires that the UsBidi was not so intelligent after all.

For most, the charger is still completely non-existent!

With chatter still circling about this absolute clanger from Indiegogo, here’s the lowdown on what went wrong in this UsBidi charger review. If you were a backer of the UsBidi charger, please hit us up in the comments with any information or insights. We’d appreciate your first-hand experience with one of crowdfunding’s darkest days.
–

For those of you not familiar with the UsBidi charger, here’s a rundown on what could have been. The Sydney based company claimed to have prototyped the world’s most intelligent charger and lead with ”your phone deserves longer battery life and a better charging experience” as the primary marketing tagline.

As a USB charger that was supposed to double the charging speed of your phone whilst auto-switching off power once fully charged, UsBidi backers were expected to receive:

However, for all of the amped up specifications, the team at UsBidi had simply overpromised on pretty much all of the above. Not to mention a lack of research into upcoming features of smartphones that were soon to be released in the coming months.
–

Before completing funding on Indiegogo, UsBidi was first launched on Kickstarter. Amassing nearly half a million dollars from backers and looking like another Kickstarter success, the team at UsBidi were leaping for joy. Then, with just 2 days left before the project was due to close out, Kickstarter pulled the plug and suspended the listing without further comment.

According to the official UsBidi at the time (which has since been taken offline) they too were left without rhyme or reason. Whether Kickstarter found out something that both Indiegogo and thousands of backers were unaware, they clearly were not comfortable.

A power play which resulted with an egg-faced Indiegogo.
–

Indiegogo Then Swallowed The Bullet:

Up next, it was Indiegogo’s turn to enlist the UsBidi charger. Launching just a few weeks later on the rival platform, UsBidi went on to complete their funding in minutes. Further smashing Kickstarter records by another $400,000, previous backers were applauding Indiegogo for uptaking the charger.

Sorry, Indiegogo. It wasn’t meant to be.

Early signs of the UsBidi charger were positive. With regular company updates and estimated shipping times released, backers were excited to receive the product. But then, those walls came tumbling. First up was a delayed product development which was then followed by a suspicious workers holiday. Then, UsBidi finally released an initial batch of USB chargers followed by sweet silence.

Well, silence from UsBidi themselves at least, the comment feed on Indiegogo is still crazy!
–

It didn’t take long for angry to trickle back to Indiegogo in rage of the products quality. Some cited that the product failed in just a few weeks whilst others claimed that the promises were complete bull and the charger was useless. 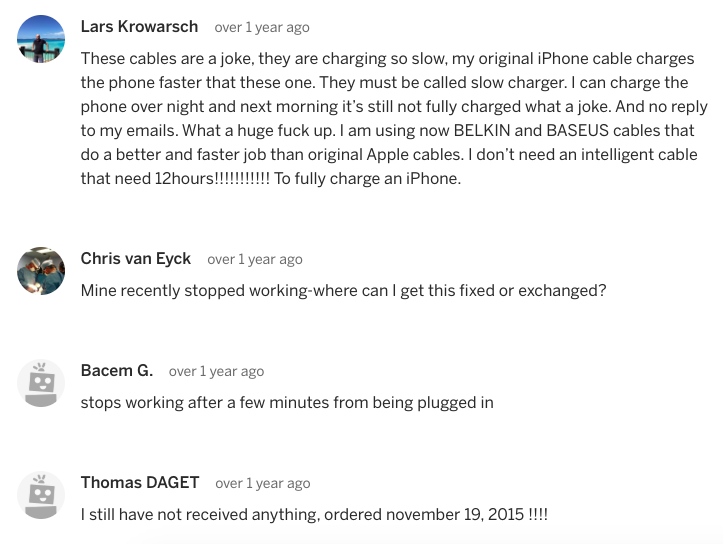 UsBidi did try to save face once or twice…

4 years later and over 3,000 comments exist on Indiegogo with a further 400+ on Kickstarter. With comments from as little as 2 months ago of customers still complaining that they never received the item, it’s fair to say that this kickstarter project was an absolute clanger.
–

Was UsBidi A Total Scam?

Whilst no evidence to convict UsBidi of being a complete scam, when you receive an investment of that magnitude and then just disappear, it’s hard not to lean to this conclusion. With so many customers commenting that they never received the product nor a refund, UsBidi has scarred crowdfunding for many first-time backers.

Honestly, we would put UsBidi’s failure down to it’s founders being immature in developing products and not understanding the potential power of crowdfunding. We don’t believe they imagined in their wildest dreams that they would receive as much press as they did. When the going got tough, UsBidi disappeared.
–

With legislation surrounding crowdfunding still in question throughout Australia, any investment is purely at your own risk. From personal experiences, we have never had an issue with crowdfunding but would recommend performing serious research first. Just like all investment opportunities, there are many factors that can turn sour and with the majority of projects listed on crowdfunding platforms from startups, the investment risk is also greater.

When investing into any crowdfunded project, you’re relying upon the honesty of the company that is requesting funding. The crowdfunding platform is also seldom liable for any failure to deliver and will always refer to strict terms of use. It’s not often that you hear of horror stories like this UsBidi charger review, however, there are too many variables to consider crowdfunding a completely safe bet. If you can afford to potentially receive something that doesn’t live up to the hype then go for broke! Otherwise, it might be best to wait until the product launches successfully and wait for a discount code.