Hotel rooms can be pretty nasty. From the bed to the chairs and everything inside it has germs, bacteria, and viruses – which can all make you sick. So to help protect your health and safety while traveling, try the CleanseBot. It’s a cute little robot that can sanitize and disinfect all the surfaces in your hotel room, including your bed.

Keeping your surroundings clean and germ-free has always been important, but more so now that we’re in a pandemic. However, when you are traveling either for leisure or business, this becomes more challenging. Unlike your home, you don’t know who has been in the room you are in, who used the bed you’re supposed to sleep in, and who held the lamp, remote, knobs, and everything inside your hotel room. Unless you have bacteria testing equipment when traveling, you won’t know how clean your hotel room is. And if there’s anything we’ve learned from Coronavirus, it’s that every surface can be a danger zone.

So when we heard about the CleanseBot, we were thrilled. It is a pocket-sized smart robot designed for your travels and marketed as the “World’s First Bacteria Killing Robot”. With this device, you can have peace of mind knowing your rooms are a little bit cleaner. But what exactly is this machine and how does it work? Let’s find out with this review.

In a rush? Click on any of the links below to skip to that section.

Launched in 2018, CleanseBot successfully raised over US$1,187,000 of funds on Kickstarter. It was then moved to Indiegogo where it’s currently available through Indemand and where it continues to rake in money. In fact, it’s already close to hitting the 2 million mark. So what made it such a hit?

According to a study by Travelmath and several professionals, hotels have bacteria – a lot of it. And it’s not just any kind of bacteria, it’s the type that could cause you a lot of health problems. For instance, remote controls were found to have Bacillus spp, which is a bacteria associated with various infections. They are also prone to several germs, including MSRA, staph, and E.Coli. There was also a recent investigation that showed several hotels neglecting to change pillowcases and beddings between guests.

These are all the problems the CleanseBot was designed for. While you may not have control over a hotel and its cleanliness, you will have control over your health and safety while traveling. With this device, you can sanitize and disinfect surfaces and prevent the spread of airborne viruses all through ultraviolet light.

Unfortunately, if we’re going to base the price on CleanseBot’s Indiegogo campaign, its original price is somewhere around US$260. This is incredibly pricey, especially since there are already a lot of similar and cheaper products around, including the ROCKUBOT and ELEKING Robot. Not to mention that you can buy good quality UVC sanitizer wands for under US$30.

The good news is, the CleanseBot is still offered at big discounts through Indiegogo. So instead of paying US$260, you’d only have to spend US$99. At this price, it’s already cheaper than the ROCKUBOT. For faster shipping and delivery, you can also try . 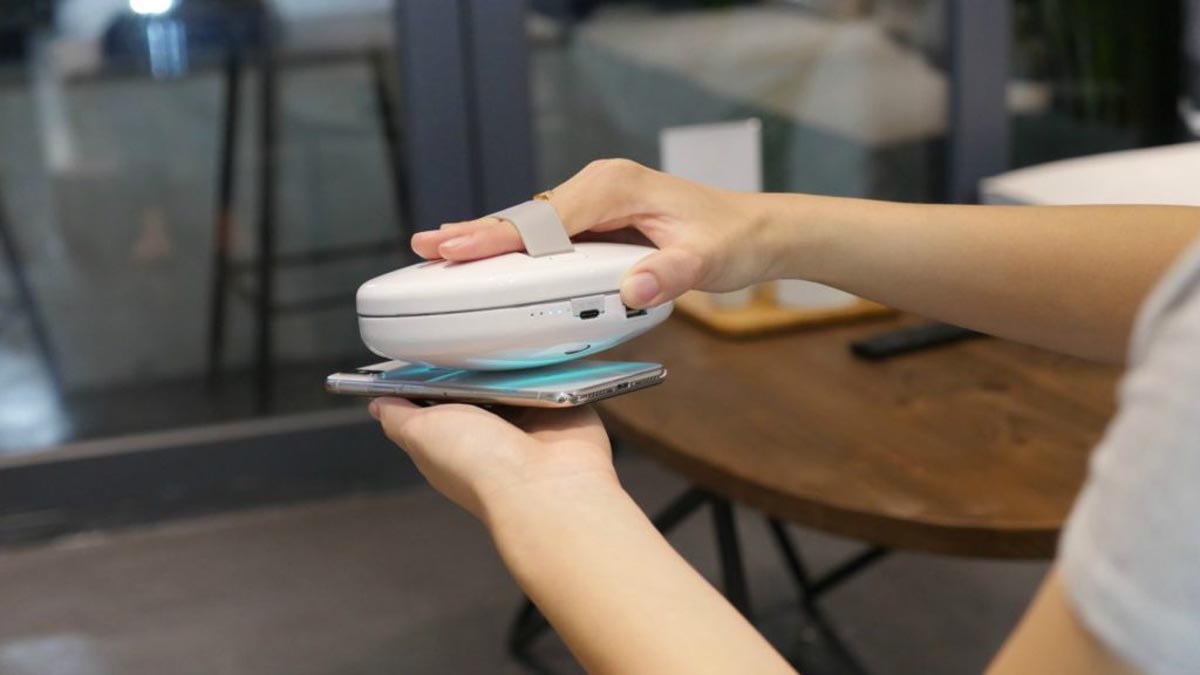 A lot of devices today incorporate UV light in their designs, from chopping boards to even power banks. This is because UV light actually does work at killing bacteria and fungi, preventing them from reproducing. Now, will it work against COVID-19? There’s not enough evidence to prove that. But it does work on other viruses, including the flu.

That said, CleanseBot is equipped with 4 UV-C lamps. It is said to be able to kill 99.99% of germs and bacteria on any surface, including beds and blankets.

CleanseBot has 18 smart AI sensors, which are meant to keep it from getting stuck or falling over the edge of your bed. It is said to be the first robot in the world that uses sensors for various materials and fabrics, not just on flat surfaces and hardwood. With the help of its wheels and patent-pending technology, this robot claims to run over any surface.

But here’s the thing, CleanseBot’s sensors might not be working as well as they should be. From our and others’ experience, this robot tends to fall off the bed now and again. And while it has no problem rolling over flat and smooth mattresses, it does have difficulty in patterned beds. Sometimes, it gets stuck under a comforter too.

Where the CleanseBot really shines is in its handheld mode. Using the handle cover, you can pick it up to sanitize and disinfect surfaces and objects directly. During this mode, only the bottom UV-C lights will work so your eyes will be protected. And since it doesn’t make any mess or emit chemicals, you can use it around your kids or pets.

With this mode, you can sanitize your hotel pillowcases, light switches, TV remote, and everything else. At home, you can use it for your children’s toys, phones, keyboards, tablets, and even your car’s interiors.

The CleanseBot can also function as a power bank. Using the USB-C port, you can plug in and charge your phone and other devices.

The CleanseBot is designed for travel, so of course, it needed to be portable. It is light and can easily fit into any backpack or suitcase. It’s also small, only slightly bigger than your phone.

You may also be interested in the Bebird Ear Cleaner: A smart ear cleaner with a built-in camera!

CleanseBot’s UV-C wave of 254nm is considered the most common wavelength for germicidal lights. It has been tested and proven to kill at least 99.99% of any pathogenic microorganism. ROCKUBOT also uses the same UV-C wavelength while the ELEKING can release a slightly lower wavelength at 253.7nm.

Compared to the ROCKUBOT, however, the CleanseBot has fewer smart sensors. And while the power bank feature is a great touch, ROCKUBOT takes this even further by adding a 10W wireless charger. It can also play some music through Bluetooth technology and has a bigger battery capacity. So in terms of features, the ROCKUBOT has more to offer.

What’s great about CleanseBot, however, is that it is backed by test results. The product itself went through independent third-party testing, proving its effectiveness. 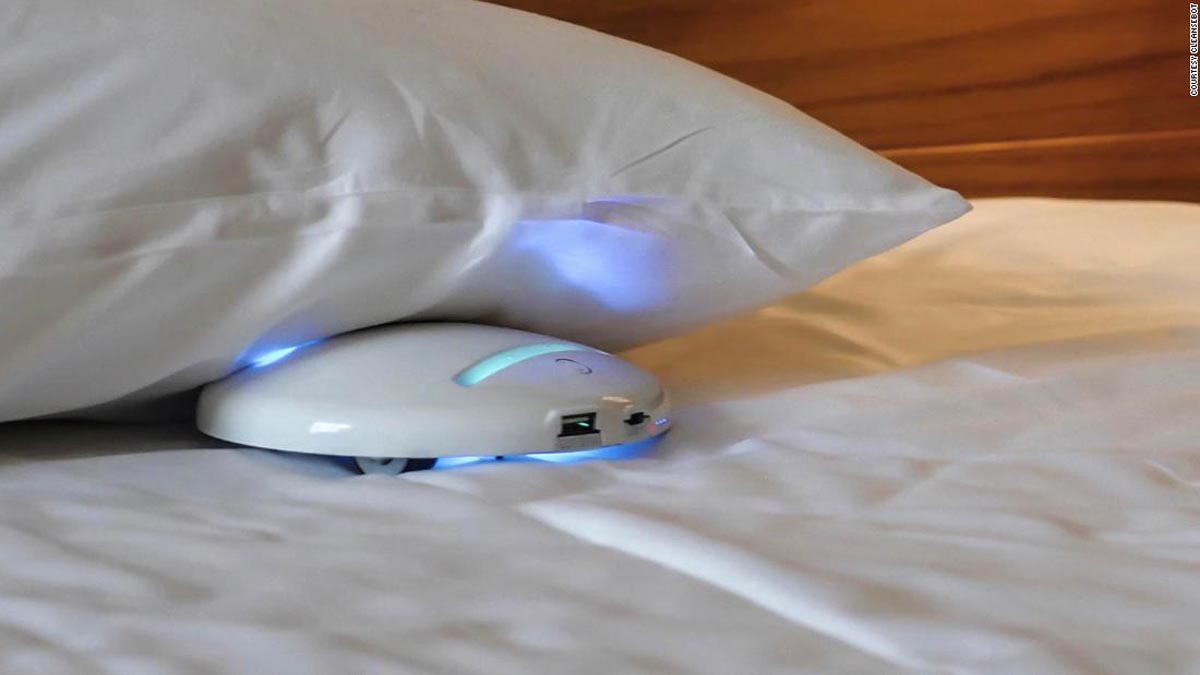 CleanseBot looks like a robotic vacuum cleaner. It’s even designed to move the same way, gliding over and in between your sheets. But instead of sucking in dirt, it uses light to clean its path. It is also a lot smaller and lighter than a robot vacuum.

In terms of design and aesthetics, the CleanseBot is tiny and somewhat cute. It looks sleek with minimal branding and it feels very solid too.

Convenient, portable, easy to use, and functions as a power bank, the CleanseBot is a true innovative product. Killing 99.99% of the germs and bacteria around you, this device can give you peace of mind while traveling and help you clean and sanitize while at home.

Unfortunately, the CleanseBot has a lot of issues. For one, it keeps falling off the bed even with the blanket draped over the edges. When under the sheets, it also gets stuck sometimes. This is a huge letdown. Without these features, you’d be better off with a UV light wand, which is also effective against germs and bacteria, is portable, and way cheaper. Another problem with this product is that even after almost 3 years, some of the original backers on Kickstarter have not yet received their product.

Overall, CleanseBot is one of the many products that look exceptionally good on paper. For its performance, however, it still needs some work. And since everything – from bacteria, germs, and viruses – is invisible to the human eye, there’s just no telling if it’s actually working. Guess you’d just have to trust the science behind it. 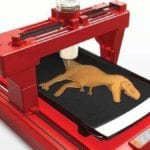 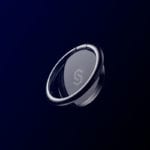