In today’s Asus ROG Strix XG27UQ review, we’re taking a look at the renowned gaming brand’s recent entry into the high-performance 4K display market. It’s a premium niche with limited contenders, so you can expect this gaming monitor to set you back some major coin.

If you’re an eSports professional or a high-end gamer looking for a 4K monitor with breakneck refresh rates and top-notch response times, there’s little out there that can match up to the Asus ROG Strix XG27UQ. Sure, it costs a bit more than some of its rivals but its blend of grade-A performance, exceptional visual fidelity, and charming design is simply remarkable.

The question is, does it really live up to all the hype? Or are you better off spending your hard-earned cash on one of its impressive competitors? That’s what we’re here to find out.

If you don’t have the time to get through the entire review, just click any of the links below and we’ll take you right to that section.

What is the Asus ROG Strix XG27UQ?

The is one of very few 4K displayed with a refresh rate that surpasses 100 Hz. It’s meant for high-end gaming enthusiasts and gamers who’re looking for peak performance to go along with their insane resolutions. This display comes in a variety of sizes both bigger and smaller, though for the purposes of this review we’ll be looking at the 27-incher.

Looks-wise, the monitor looks similar to most other entries in the ROG Strix and Swift lineups, with its face looking fairly lowkey, if not a little plain, while its back portion is vaguely reminiscent of something straight out of the transformers movies. It’s a cool-looking peripheral, all things considered, and one that doesn’t oversell its gaming purpose as ROG product like the ROG Rapture GT AC5300 often do.

Brace your wallet, however, as this piece of hardware definitely doesn’t come cheap, sporting a price tag that’s a fair bit more expensive than the extremely impressive LG 24MP59G-P.

Editor’s note: The ROG Strix XG27UQ made it onto our list of best gaming monitors for 2021. 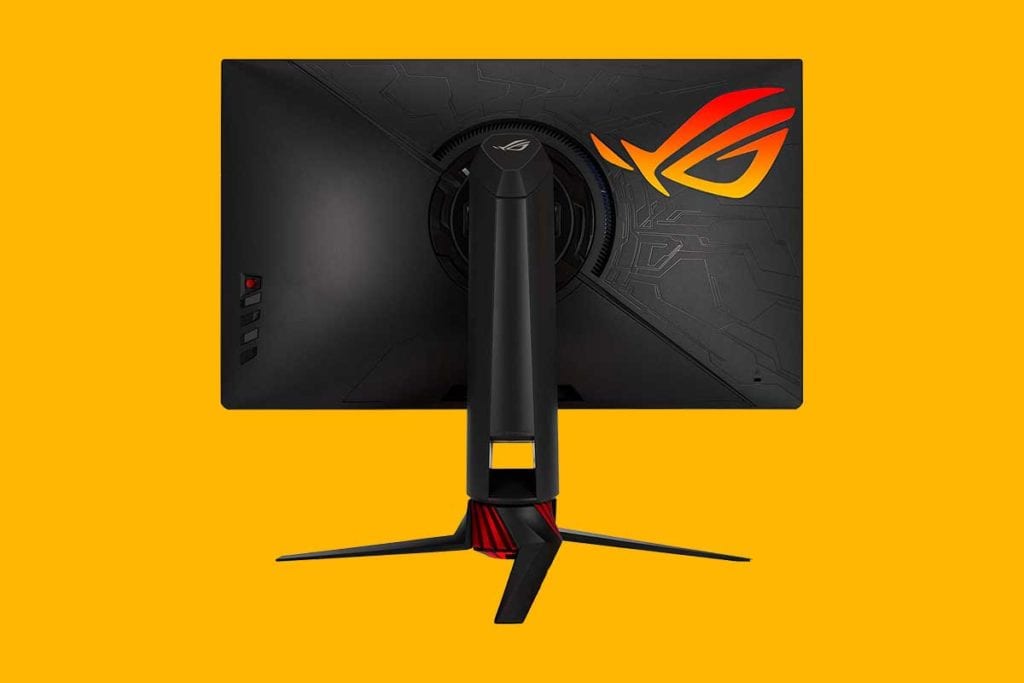 The ROG Strix XG27UQ boasts a 27-inch screen with a 4K resolution (3840 x 2160) and refresh rates up to a whopping 144 Hz. It doesn’t stop there either, as its response time is a remarkable 1ms GtG, making it a perfect monitor for professional gaming.

It utilizes an IPS panel so you can expect excellent colours and stellar viewing angles. Its stand offers a wide range of motion, with the ability to tilt 5° forward and 20° backwards, as well as a swivel range of 40° to either side. It also allows for height adjustment of up to 12 cm.

Whether you’re an Nvidia enthusiast or an AMD fanboy, you’ll be glad to know that the ROG Strix XG27UQ is fully compatible with both G-Sync and FreeSync, so you won’t have to stress out about what kind of card you have. It’s worth noting, though, that G-Sync only works if you’re using a DisplayPort connection.

The ROG Strix XG27UQ serves some wonderfully accurate colours right out of the box, with the only thing that needs a tiny bit of tweaking being the display’s white balance – an aspect that can easily be fixed through some in-menu calibration.

The monitor features an exceptional colour gamut which is to be expected thanks to its IPS panel, making your favourite shows and video games look remarkably deep and vibrant. Unfortunately, one of the IPS panel’s major weaknesses still stands, with its mediocre contrast ratio causing blacks to appear greyish in darker environments.

We put the picture quality to the test with a quick playthrough of Resident Evil 3 Remake. In brightly lit areas, blood splatter and enemies mobs looked satisfyingly grotesque on account of the vivid colour palettes, though the blacks were increasingly lacking in intensity the dimmer the environments.

As for screen’s viewing angles, they’re merely okay both vertically and horizontally, since you’ll be introduced to some wash out the moment your view is even slightly off centre. The ROG Strix XG27UQ offers 6 levels of overdrive, with the lowest being “Level 0” and the highest being “Level 5”.

At max refresh rate, the overdrive levels all work splendidly, introducing a minuscule amount of blur across all settings. We do, however, recommend leaving the setting somewhere in the middle to reduce the level of colour offshoot. The monitor also has some cool extra features, such as Shadow Boost, a built-in FPS counter, a timer, and a virtual crosshair.

A major drawback of this monitor is the requirement of a graphics card that supports Display Stream Compression through a DisplayPort connection in order to achieve its maximum refresh rate of 144Hz. This means older yet relatively still powerful cards like the GTX 1080 and 1080 Ti won’t be able to unlock the display’s full potential. 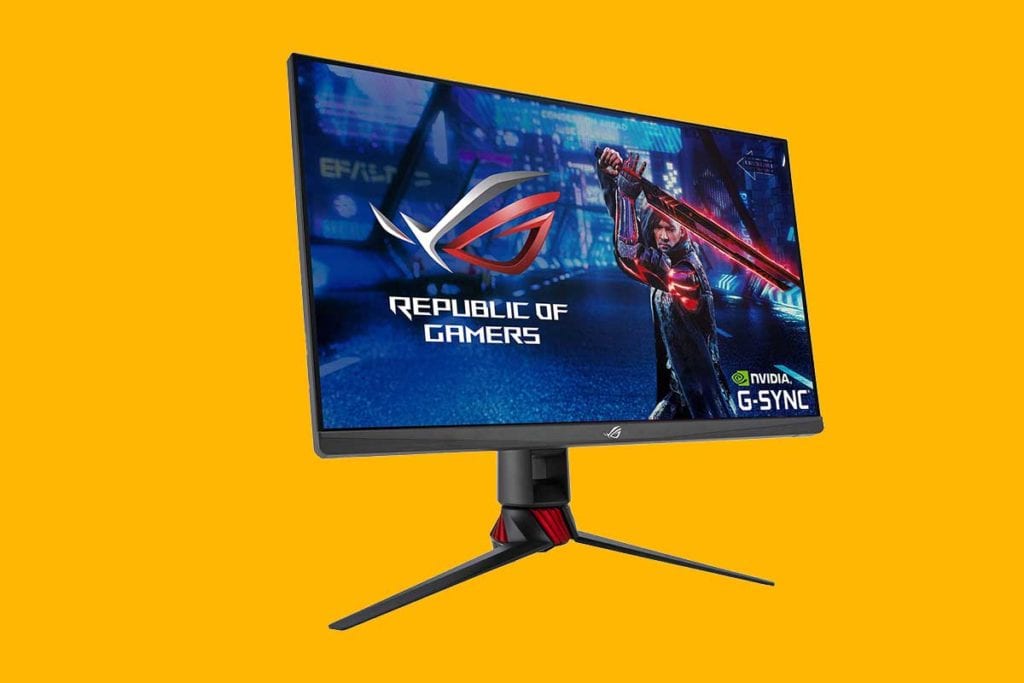 Setting up the ROG Strix XG27UQ is even easier than most monitors since there are only 2 pieces to work with. The screen itself is already linked to an arm, so all you have to do is attach the accompanying base and fasten it with the bundled screw. Finally, slip on the projection cover and you’re all set.

Its On-Screen Display is a personal favourite of mine due to how well-spaced and easy to navigate the menus are. There are four buttons to fiddle with which can be found on the back portion of the right side of the monitor along with a nifty joystick. I’d rather have the controls be placed on the face of the display, as they did with the ViewSonic Elite XG270, but they’re easy enough to use nonetheless.

If you’re looking at the face of the screen alone, the ROG Strix XG27UQ is quite low-profile with its muted grey colour scheme and thick bezels all around. Most of its edginess comes from the turbine-like tripod base that comes with some red highlights and a bright-red RGB projection that shoots straight down to your desk. That and futuristic etchings that can be found on the backside of the monitor.

All of it comes together rather nicely to form a monitor that doesn’t hide its gaming purpose but doesn’t try too hard to flaunt it either. The ROG Strix XG27UQ is nice and sturdy since the screen and arm are both made up of reinforced plastic that feels dense and tight, while the base is weighty metal. You won’t find any rickety parts here. 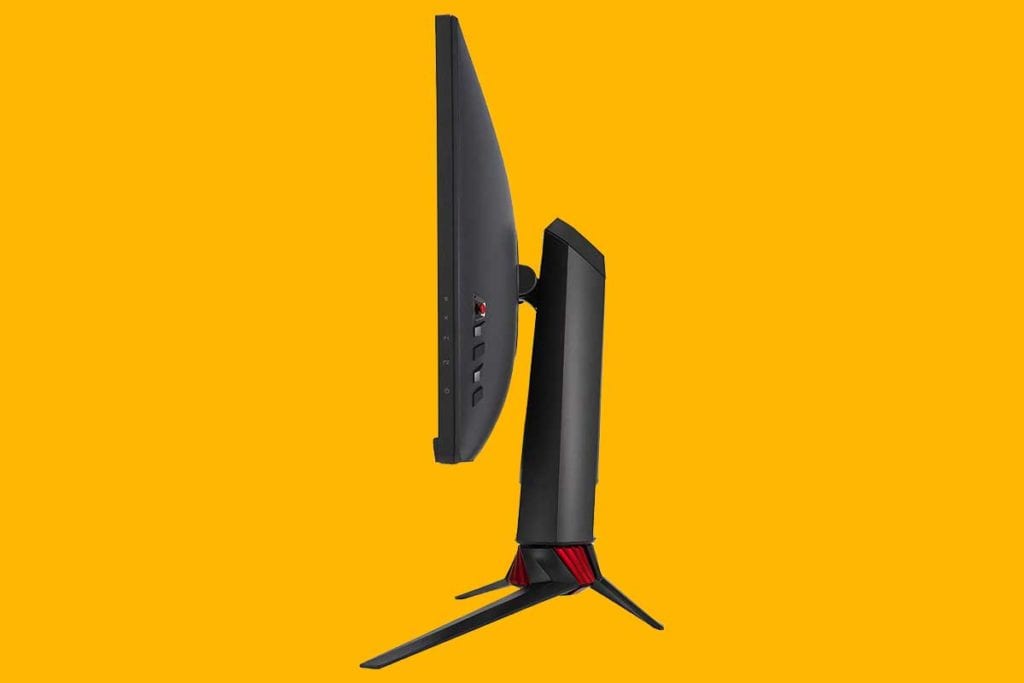 If you’ve been in the market for a 4K monitor capable of refresh rates above 100 Hz, then you know that the pickings are slim. But that doesn’t mean you have to settle. The Asus ROG Strix XG27UQ offers up a healthy mix of high performance, stunning visuals, a great design, and a rugged build.

The requirement of a DSC supporting graphics card to unleash its full power is quite the letdown, then again you’re probably going to need a beast of a GPU to run modern games at 4K and over 100 FPS  either way. It may be a bit pricier than some of its alternatives, but if you can spare the extra cash then you definitely won’t be disappointed. 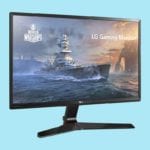 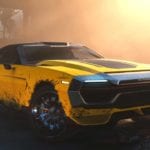