Select the ultimate office warfare weapon and claim victory with the Rubber Band Minigun. Inspired and designed according to the Gatling Machine Gun Principle, this wooden toy gun can shoot 144 rubber bands in one go. So you can bring in maximum fun minus the pain to your co-workers, friends, competition, and family members.

For many of us, we didn’t grow up with Nerf guns or high-tech gadgets. Instead, we had improvised guns that can shoot rubber bands as bullets. We’d spend hours on end, pretending as cops and robbers and just shooting at each other. And while getting shot stung, it was a fun experience to remember.

Now as we got older, shooting rubber bands remains to be a great and less painful way to settle disputes while still having some fun. At home or with your friends, you’d probably find a way to play with them. Not to mention that no office battlefield is complete without a war of rubber bands. So if you want to emerge victoriously and put an end to it once and for all, then this might just be the weapon you need – the Rubber Band Minigun.

Designed and created by Weaponized T-Rex, the Rubber Band Minigun is a fully automatic wooden toy gun that follows the Gatling Gun Principle. So with it, you can feel like Rambo and launch a rubber storm to your opponents, burying them with over a pound of rubber bands.

Pretty neat, right? Find out more about this rubber band gun here and see if it’s the right weapon of choice for you. Can’t read the whole thing? Just click on any of the links below to skip to that section.

Aside from being a weapon of choice for adults, a rubber band gun is also a nice toy for kids. But many of the rubber band guns today only have limited shots and can take a while to reload. With the Rubber Band Minigun, however, these are non-issues.

Able to shoot 144 rubber bands in one reload, the Rubber Band Minigun is a beast. It even promises quick and easy reloading. Just place the rubber band, stretch it, and click. That’s it! In terms of the number of shots, it beats out the Jr. Devastator Gatling Gun, which is considered the ultimate weapon and finest rubber band gun today. It is also a lot cheaper, especially with the Devastator’s staggering price tag of US$1,065.

Compared to other rubber band guns, however, the Minigun is pretty pricey. Launched on both Kickstarter and Indiegogo, it was offered at US$109 to US$129, depending on the color and form you choose. This is 2, 3, or even 4 times more than the cost of some of the top rubber band gun toys today, including the , Pistol 45, , and . 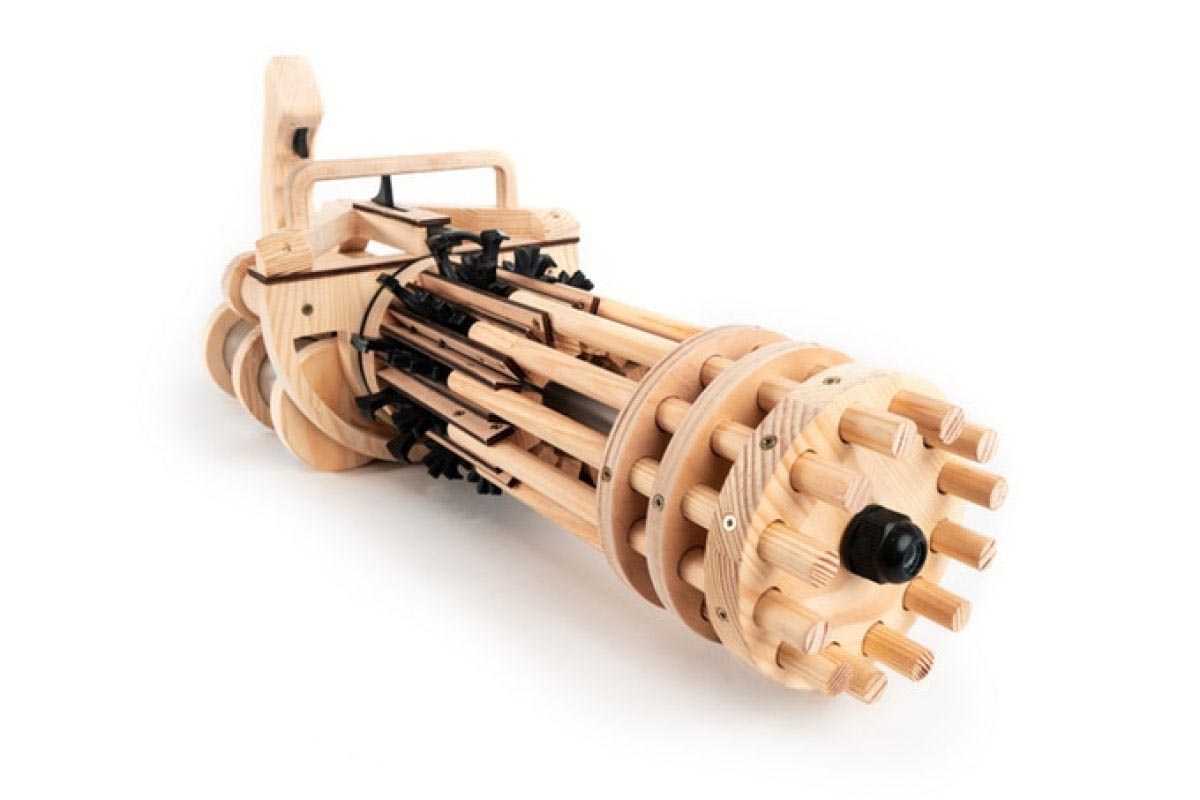 What we love about the Rubber Band Minigun is that you have the option to assemble it on your own. As someone who enjoys crafting and DIY projects, this is a great toy to show our passion. We also love that we can share the experience of building a toy with our kids. The kit version is easy to assemble and requires no glue or soldering. You can even finish it in 1 to 2 hours.

On the other hand, if you don’t like building things, you can always opt for the assembled version. This way, you can go straight to the battle and send a flurry of rubber bands to your opponents.

One feature that sets the Rubber Band Minigun apart from most rubber band guns today is its electric motor. This is exactly what makes it a fully automatic minigun, allowing you to launch 144 rubber bands in just seconds. Just pop in some AA batteries and you are good to go.

According to the company, what makes the Minigun unique from other heavy-duty rubber band guns is its easy loading mechanism. It is specially designed so you can fully load it in minutes. Just place the rubber band in place, stretch, click, and you are ready to go. It is said that you can do all that in less than 5 minutes.

Personally, though, 5 minutes is still a long time to be reloading a toy gun. If you were in a rubber band war game, you’d be hit as many times or even more than you put out while trying to reload.

If you like this, you’ll likethe Spyra One Water Gun!

With 144 shots, the Rubber Band Minigun is one of the wooden toy guns with the most ammo. It is more than the 80-shot output of the Jr. Devastator Gatling Gun and other rubber guns from Magnum Enterprises. However, it is still no match with the 900 rubber bands that the Tough Timbers Machine Gun can hold.

The Minigun’s shooting range of up to 30 feet is also at par with most rubber band guns today. But it can’t compare to the Devastator, which can shoot up to 40 feet away. 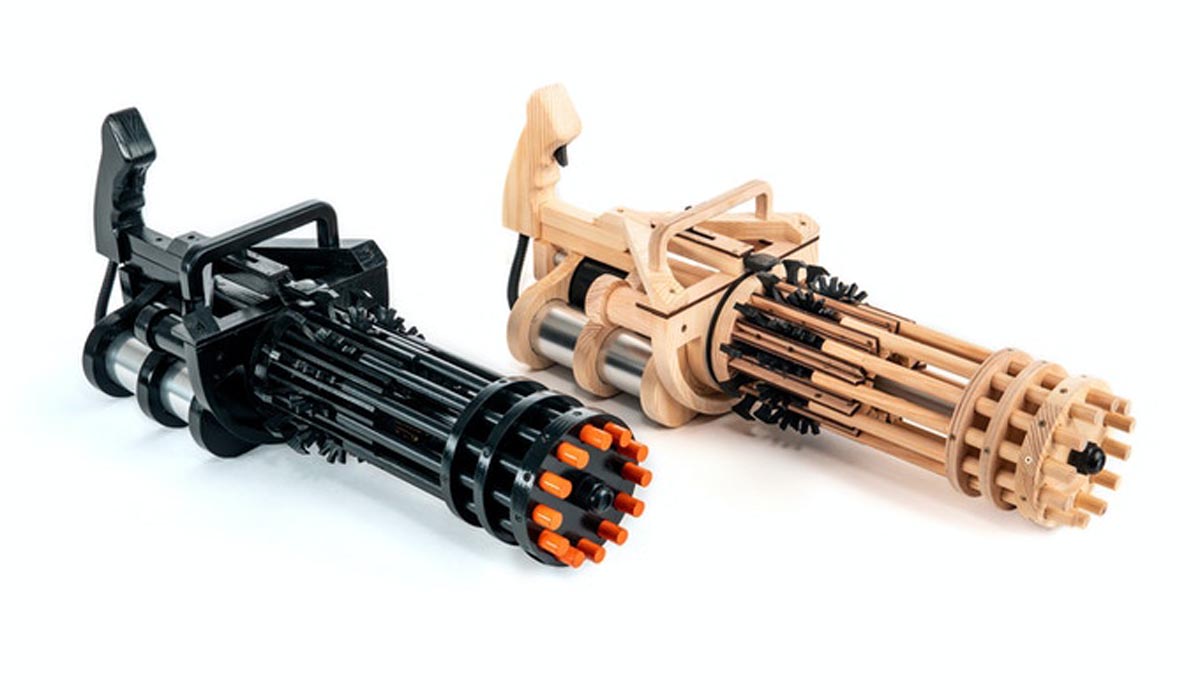 When it comes to the overall look, the Minigun beats out all the other rubber band guns in the market. It has a more solid, cool, and finished aesthetics, especially with the black version. This version is painted in several layers of black acrylic paint, which has no smell or harmful effects. However, getting a better-looking Minigun will cost you more. At Kickstarter, it was priced at US$124 to US$129 while the wood version is only US$109 to US$114.

The Rubber Band Minigun is one of the most heavy-duty yet affordable rubber band guns in the market today. Sure, many cheaper wooden toy guns can shoot rubber bands too. However, they can’t shoot as many rubber bands as the Minigun. And yes, while other brands are more powerful and can and shoot more rubber bands, their prices are just ridiculous.

Overall, if you are looking for a rubber band gun that will obliterate your opponents without breaking the bank, then the Rubber Band Minigun is definitely the best option for you. It has the power, design, and an impressive number of shots that will make anyone running for their lives. Just make sure everyone’s down already when you need to reload because even with its easy loading mechanism, getting 144 rubber bands in there will still take some time. 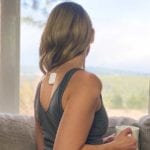 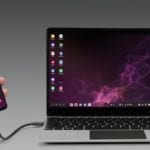